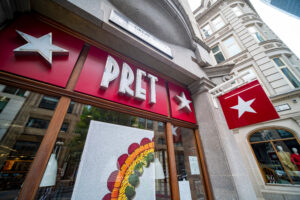 Pret a Manger is plotting to expand outside London and other big city centres as large numbers of office workers continue to work from home, with plans to open 100 franchised shops, plus about 100 of its own outlets.

The coffee and sandwich chain has been hit hard by the Covid-19 pandemic as its city centre outlets suffered from the absence of commuters and tourists. But the company said that in some regional towns its shops were busier than they had ever been.

The move comes as Pret – which last week rowed back on plans to slash staff bonuses after workers threatened strike action – has come under severe financial pressure during the pandemic. The company ditched its dividend payment to shareholders, and in April warned of “material uncertainties” over whether it could continue as a going concern.

The company said it was in talks with possible franchise partners, which could extend its reach outside London and other big cities across the UK. It is drawing up plans to open about 100 franchised outlets – restaurants that would be run by independent operators on its behalf – over the next two to three years.

It is also proposing to open about 100 more of its own shops over the next three years.

The move follows the launch this year of a partnership with Tesco to trial Pret shops inside Tesco branches in Kensington in west London, Peterborough, and other locations as part of a shake-up of its business model after the pandemic.

A Pret spokesperson said: “In some areas such as regional towns and parts of northern England, our shops are busier than they have ever been.

“We’re looking to establish new partnerships with franchise partners to bring Pret to more people in towns and travel hubs across the UK, and we’re also looking at where we can open more shops which we run directly.”

Pret workers, the vast majority of whom earn basic pay at the legal minimum of £8.91 an hour, had threatened to down tools over proposed pay cuts. On Thursday, after the planned changes prompted an outcry on social media, the company said a service bonus linked to performance judged by a mystery shopper would be restored to £1 an hour. Nevertheless, the chain has not reversed a decision to cease paying for break times.