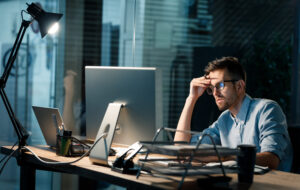 Covid working from home has caused an “epidemic of hidden overtime” that particularly affects women, leading to a need for new “right to disconnect” laws, according a report from Autonomy thinktank.

The organisation said unpaid labour was a growing problem in the age of increased home working, with women at a greater risk of negative health impacts and mental distress.

As part of the report, it proposed draft legislation that would create a “right to disconnect”, based on French law, which stipulates employees do not have to take calls or read emails related to work during their time off.

It called for two amendments to be made to the Employment Rights Act 1996 to ensure workers have the right to fully disconnect from all work communications outside working hours and bring employment tribunals for any breach of that.

It suggested an employer should “not require a worker employed by him to monitor or respond to any work-related communications, or to carry out any work, outside the worker’s agreed working hours” or subject the worker to any detriment for failing to do so. There would be proposed exemptions for industries where that is not feasible and where the employer has made all reasonable steps to minimise working outside agreed hours.

The report said a previous study conducted by Autonomy, Compass and the Four Day Week Campaign about overwork during the Covid pandemic, found that at all stages of the crisis negative mental health impacts have been felt disproportionately by women.

The study found that women are 43% more likely to have increased their hours beyond a standard working week than men, and for those with children this was even more clearly associated with mental distress.

Will Stronge, the director of research at Autonomy, said the Covid pandemic has “accelerated the need to create much clearer boundaries between work-life and home-life”.

Angela Rayner, the deputy Labour leader who holds a shadow cabinet brief on the future of work, said: “Alongside the right to flexible working, there must be the right to disconnect. It is only fair that workers are able to establish healthy boundaries, switching off and disconnecting from work outside working hours.

“In the modern workplace, we cannot find ourselves in a place where workers are expected to compromise their families, responsibilities or hobbies in order to meet employer expectations. It’s not a sustainable way to run an economy. Many good businesses want to see these sorts of protections guaranteed to workers across the board.

Andrew Pakes, research director at Prospect, said: “Other countries have already acted to address this by bringing in a right to disconnect for workers, and we are calling on the UK government to take action now so that we are not left behind.”

The government has not supported a right to disconnect but it has a flexible working taskforce looking at the issues around working from home that arose during the pandemic.