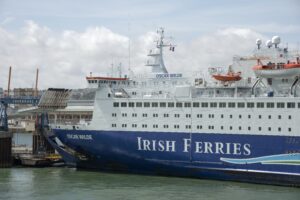 Exports from Ireland to Great Britain soared in the first six months after Brexit as imports sent in the opposite direction declined, according to Irish government figures.

In a sign of post-Brexit imbalances in trade, the Irish Central Statistics Office (CSO) said goods exports to Great Britain (excluding Northern Ireland) rose by 20% to €6.7bn (£5.7bn) in the first six months of 2021, an increase of more than €1.1bn compared with the same period in 2020.

According to the CSO, exports from Great Britain to Ireland decreased by 16% in June compared with the same month in 2020, with food, live animals and manufactured goods hit hardest.

British exporters have been hit harder by Brexit because they faced border checks from 1 January on shipments to the EU, while Irish and EU exporters to Britain have benefited from a phased in approach the UK government opted for over a 12-month transition period.

It means while all food and plant exports to the EU have been subject to sanitary and phytosanitary checks since January, countries including Ireland selling into the UK are not being subject to the complete panoply of red tape until January 2022.

Exports in June to Great Britain overall increased by €575m to €1.42bn compared with the same month in 2020, with the largest increases recorded in the chemical and related products sector, and in the machinery and transport equipment sector.

Previous studies indicate trade between Northern Ireland and the Republic of Ireland has benefited from Brexit, with Northern Ireland businesses now sourcing some raw ingredients south of the border because of the absence of trade barriers.

The latest snapshot from the CSO showed the value of goods imported from Northern Ireland to the Irish Republic rose by 77% to almost €1.8bn in the first six months of 2021, compared with the same period in 2020.

Exports from the Irish Republic to Northern Ireland rose by 40% to almost €1.6bn over the same period, reflecting increased cross-border trade since Brexit as the region effectively remained in the EU’s single market for goods.