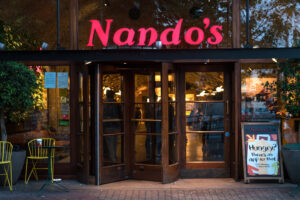 Nando’s has been forced to temporarily close around 50 restaurants after suffering chicken shortages due to supply chain disruptions across England, Wales, and Scotland.

The peri-peri chicken maker, which operates some 400 sites around the country, also said it would lend some of its staff to its suppliers to help “get things moving” again after its business was rocked by shortages.

Responding on social media to customers complaining about their local Nando’s being shut, the company said that “the UK supply chain is having a bit of a ‘mare right now”.

The company confirmed that its sites in Northern Ireland and the Republic of Ireland, which have a unique customs arrangement due to Brexit, had not been affected.

Food supplies have been hit this summer by delays at ports, freight and shipping services triggered by Brexit, in addition to swathes of workers being forced to isolate after being pinged by the NHS Test and Trace app.

Fast food giant KFC said it was having similar issues last week, warning that some items would not be available and packaging “may look a bit different to normal”.

“There has been some disruption over the last few weeks, so things may be a little different when you next visit us,” the company said.

At the end of July, it was reported that the UK was short of an estimated 100,000 lorry drivers and that major retailers were offering bonuses of thousands of pounds to attract them.

It comes after warnings from other retailers that they are under “increasing pressure” to keep shelves fully stocked due to staff shortages caused by the “pingdemic”.

Industry bosses warned last month that supply chains were struggling due to the number of workers, including lorry drivers and meat-processing staff, being told to isolate by the NHS COVID-19 app.

Nando’s added that delivery schedules meant the situation was changing rapidly and suggested customers check the website before they visit.

The government hopes that rule changes set to come in to place this week – removing the requirement for fully vaccinated staff to self-isolate after they are pinged by the NHS app.

From this week, fully vaccinated staff no longer have to self-isolate, a rule-change the government hopes will ease the pressure on businesses running short of staff.