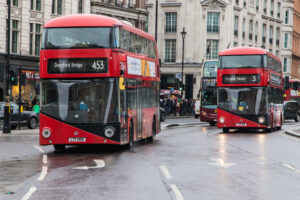 Three hundred workers are being taken on by Wrightbus as the company accelerates its plans for growth in a new era of zero-emission transport.

“We are firmly back in business, creating jobs,” said Jo Bamford, son of Lord Bamford, the JCB chairman and owner, who rescued the business in 2019 when the workforce numbered only 56. The new jobs will take employee numbers at its plant in Ballymena to more than 900.

Wrightbus is best known for producing the 21st-century version of London’s historic Routemaster double-deckers. The company is being fired up as the government’s pushes to convert much of the economy to hydrogen.

Before Wrightbus, Bamford, 43, was an investor in hydrogen production and delivery infrastructure and is a strong believer in hydrogen as the long-term solution to decarbonising the bus sector. Wrightbus has won an order for 100 zero-emission buses — a mix of hydrogen-fuelled and electric vehicles — from Translink, Northern Ireland’s state-backed bus company.

“Our order book is looking very healthy, with our zero-emission buses in high demand, and we have multiple conversations with a number of bus operators from across the UK and Ireland,” Neil Collins, managing director of Wrightbus, said.

“We’re aiming to increase bus production again next year, which in turn will lead to the creation of even more permanent jobs. We’re now the UK’s only bus-builder with both a hydrogen and electric product on the market.”

Ian Paisley, the local MP who brokered the Bamford rescue, said that he was lobbying Boris Johnson for wider support. “Hydrogen technology is the way ahead for zero emissions and a hydrogen hub in Ballymena training engineers and developing products would be a natural fit for the area,” the DUP MP told the Belfast Telegraph.