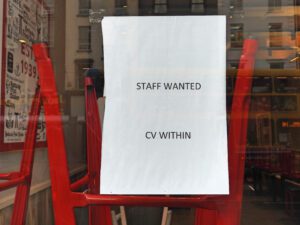 The number of job adverts in the UK is well above pre-crisis levels with a large proportion of those out of work or on furlough not looking for a job, research suggests.

The volume of online job adverts last week was 128 per cent higher than in February last year, the Office for National Statistics said yesterday. This was down slightly from the previous week but indicates that vacancies are holding up strongly after the initial boost in the spring when the country started to emerge from lockdown.

The Indeed survey covered 5,000 adults who were questioned in July. A total of 1.9 million workers were on furlough at the end of June. The scheme is due to end at the end of next month.

Official figures released this week showed that job vacancies passed one million for the first time in July and employers created 182,000 jobs. However, at 28.9 million, payrolls were still 201,000 below their pre-pandemic levels.

The Bank of England is optimistic that many workers will move back into work when the furlough scheme expires. In the health sector, the number of vacancies is higher than the number on furlough, so furloughed workers should find it easier to secure new jobs.

Jack Kennedy, UK economist at Indeed, said: “Many employers are desperate for staff, but a significant portion of the workforce appear surprisingly relaxed about finding work, preferring to wait for more job opportunities to emerge.

“Even with the end of the furlough scheme looming, most are feeling optimistic about returning to their workplace and so are in no rush to find a new job. But with almost two million people still on the furlough job retention scheme, some may soon learn they will not be going back and will therefore need to start actively searching.”

The ONS said that 14 of the 28 sectors it monitors recorded a fall in the number of job adverts last week. Seven were unchanged and seven rose. The largest weekly falls were in the charity sector and education, which both registered a 7 per cent drop. The largest rise was in domestic help, up by 4 per cent. The logistics category had the highest number of job adverts relative to its pre-pandemic level at 335 per cent of February 2020.

The ONS found some weakness in consumer spending in its weekly report on economic indicators. Spending on credit and debit cards fell to 94 per cent of its pre-pandemic level, 5 percentage points down on the previous week.

Read more:
Job adverts well above pre-Covid levels as many opt to wait and see