I am pleased to share with readers excerpts from a note sent September 2020 to subscribers of GlobalSource Partners upon the release of the Development Budget Coordination Committee’s Fiscal Risk Statement (DBCC FRS). Christine Tang and I, assisted by Charles Marquez, are their Philippine Advisers.

The 2020 DBCC FRS (https://www.dbm.gov.ph/wp-content/uploads/DBCC_MATTERS/FiscalRiskStatement/Fiscal-Risks-Statement-2021-for-Circulation.pdf) expounded on the impact of the COVID-19 pandemic on government’s fiscal health over the medium-term. Below are our key takeaways of fiscal risks to keep watch on over the medium-term. (Verily, the finance/economic team of the next administration have their work cut out for them!)

1. The DBCC expects the National Government debt-to-GDP ratio to swell from below 40% last year to 53% this year due to the emergency borrowings made to finance the suddenly wider budget deficit. The debt ratio will continue to climb with “moderate risk” of exceeding 60% as soon as next year. A reversal to a downward path for the debt ratio depends on GDP growth and the fiscal deficit returning to their pre-crisis averages over the medium-term.

The higher debt will need closer monitoring as it translates into much higher annual gross financing needs, exceeding 10% this year and next. Rollover risks are partly mitigated by looser monetary policies everywhere that will keep interest costs low, with the foreign currency share making up only about a third of total National Government debt, a portion of which is held by residents. The Philippines also has a robust external payments position that provides fundamental support to the currency. 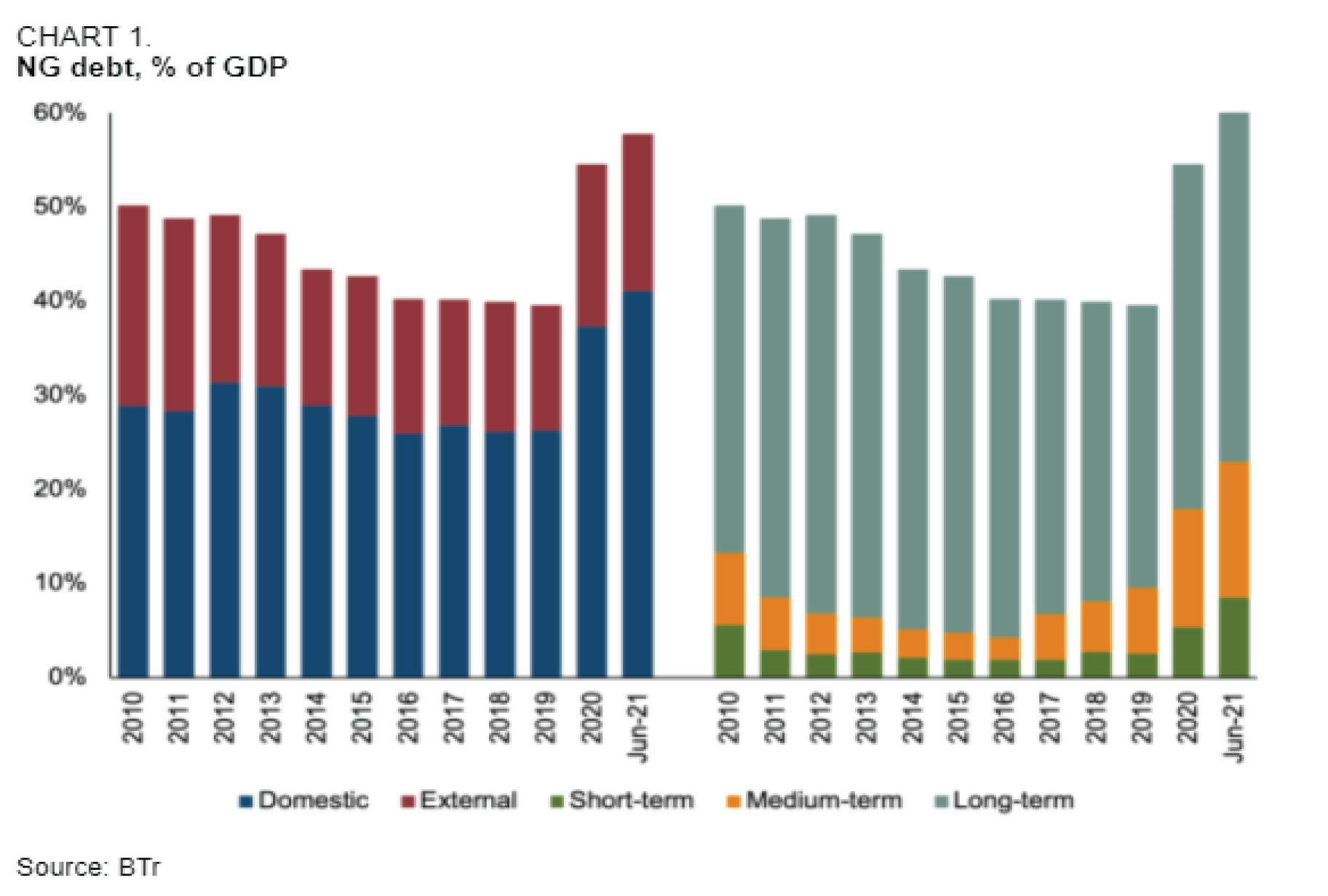 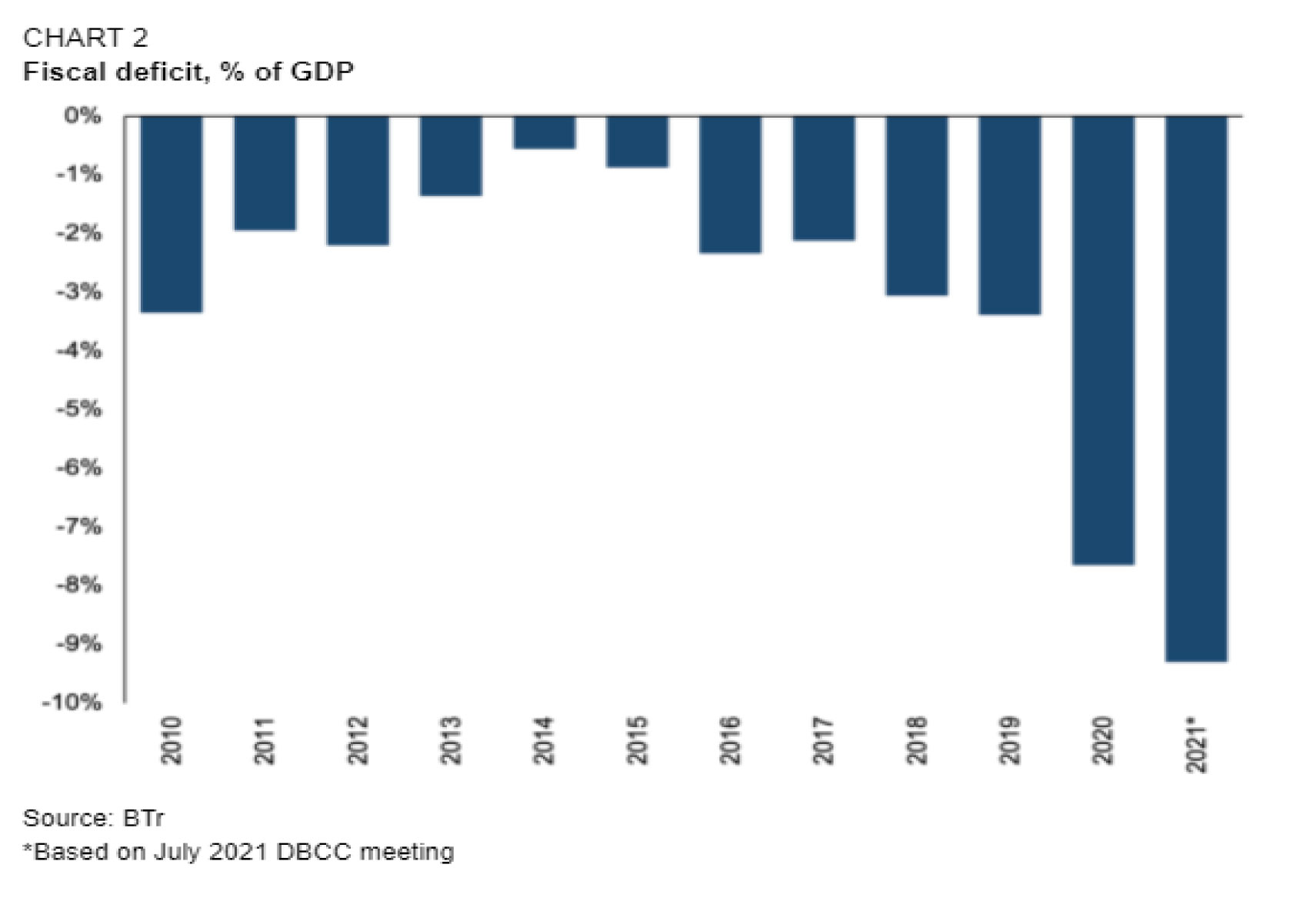 2. National Government revenues, forecast to fall to 13.6% of GDP this year or 2.7ppt below the pre-crisis level, will not return to pre-crisis levels in the foreseeable future. Following the declaration of a state of emergency, government was able to secure more than P100 billion (0.5% of GDP) in unprogrammed revenues from public corporations in the form of dividends. This amount is one-off, with non-tax revenues expected to be lower by 1% of GDP by next year. The passage of CREATE lowering corporate income taxes will further erode tax revenues with compensatory inflows from the rationalization of fiscal incentives expected to be pushed back. No new taxes are likely under the current economic crisis, especially with the administration in its penultimate year.

3. With lower revenues, the fiscal space for discretionary spending is expected to shrink further. Even before the pandemic, the National Government was already grappling with how to deal with (a.) ballooning pension costs of military and uniformed personnel, estimated at P114 billion (about 0.6% of GDP) and growing by 3-4% annually, and, (b.) a Supreme Court ruling (Mandanas case) requiring increased annual transfers to local government units amounting to 0.9% of GDP starting 2022. Moving forward, interest payments on the larger national debt will take up an increasing share of the budget (from 9.5% in 2019 to 12.9% by 2022) which however is well below the 30% share recorded in the mid-2000s. On the other hand, some cutback in infrastructure spending may already be seen in programmed disbursements falling to 4.5% of GDP by 2022 from over 5% next year. Proposals to address (a.) and (b.) will gain more urgency to enable government to do more to hasten post-crisis recovery.

4. Fiscal risks from other parts of the public sector have likewise risen due in part to off-budget financing of COVID-19 expenses. Social security institutions were the first to see surpluses reverse to deficits (close to 0.5% of GDP this year) due to substantially higher medical and unemployment insurance payouts, while the aggregate surplus position of frontline local government units is expected to halve this year (from 1.3% of GDP in 2019) and further deteriorate next year to 0.5% of GDP. Government financial institutions (GFIs), in addition to providing debt moratoriums and other temporary relief measures, are also being tapped to finance the post-crisis recovery effort with the financial impact of developmental lending and guarantee activities dependent on safeguards that will be put in place during program design. Other major corporations, particularly in the transportation (aviation, ports) and energy sectors, have also seen revenues from operations drop with economic contraction.

Although most of these represent contingent liabilities that may never materialize, some parts would require major reforms to correct structural defects and avoid recurring National Government subsidies, equity infusion or advances for debt service. (At risk of requiring more government support at this time, is the health insurance agency which aside from a spike in COVID-related payables, will see revenues drop with corporate bankruptcies and higher unemployment to the detriment of universal healthcare goals.) Even before the pandemic, government had outstanding guarantees on public corporations’ debts and contractual obligations equivalent to 3.3% of GDP which it was servicing through “advances” amounting to 1.4% of GDP in 2019. Over the last 10 years, net budgetary flows to the corporate sector have been negative, ranging from 0.1% to 0.6% (2019) of GDP.

Local government units would separately need attention considering their high dependence on National Government transfers for operating income (60%) and with anticipated increases in revenues from the Mandanas ruling likely short-lived given the COVID-19 shock to the National Government’s own revenues.

5. Contingent liabilities associated with contractual obligations under public-private partnership (PPP) projects likewise need monitoring as the risks are expected to be correlated with the state of the economy, with the downturn adversely affecting projects’ revenue flows and/or proponents’ balance sheets, thus potentially impacting project viability. Based on the 41 projects for which information is available, a worst-case outcome involving termination payments will cost government the equivalent of 1.7% of 2020 GDP although an assessment of contingent liabilities based on project-specific probable risk factors yield an estimate that is only a tenth of that.

6. Aside from GFIs, government also has explicit (through deposit insurance) and implicit guarantees over the rest of the banking sector that require closer monitoring of individual and system-wide bank risks as asset quality and profitability deteriorate with weakened economic prospects. The risks are mitigated by ample capital buffers and increased provisioning for bad loans. Going into the crisis, the capital adequacy ratio of the big universal/commercial banks stood at 16% (consolidated basis) with high-quality Tier 1 capital at 14%, well above the BSP (Bangko Sentral ng Pilipinas) and BIS (Bank for International Settlements) prescribed thresholds of 10% and 8%, respectively. These banks have also increased loan loss provisions by 64% in the year to July, providing over 1.2x coverage for bad loans slightly up from below 1.1x at end-2019. While the risk of system-wide stress is low, it would nonetheless be impossible to discount problems at the individual bank level, especially those that have not developed strong credit disciplines. Separately, operational risks associated with cybercrimes have also gained prominence.

BOTTOMLINE VIEW
Thanks largely to successive reforms since mid-2000 to strengthen public finances, the National Government was well-positioned to respond to the crisis and is able moving forward to assume a greater role in driving economic recovery without sacrificing fiscal sustainability. The challenge of course is to optimize the use of scarce fiscal resources to generate immediate employment creating economic growth that can be sustained over the medium to long term. Moderately high sustained growth will help to lower the debt ratio through higher tax revenues (and lower primary deficit) and a more positive growth-interest rate differential. To this end, more urgent reform action is also needed to increase the efficiency of public spending and investments, including in addressing the imbalance between transfers to local government units and devolved functions.

At the same time, a more deliberate and comprehensive analysis of fiscal risks associated with needed new programs to hasten economic recovery and job creation, e.g., by providing liquidity to distressed firms, would help in managing and mitigating these risks over time and avoid abrupt and harmful threats on fiscal sustainability. Lastly, with the pandemic’s harsh impact especially on the poor and with elections less than a year away, fiscal sustainability also requires extra vigilance on the part of economic managers to ensure that new social programs are not just timely and targeted but temporary.

How to identify the best income shares like this one

This growth stock has seen its shares pull back! Should I buy now?

Is this tech stock one of the best shares to buy now?

I think the JD Sports share price is a bargain. Here’s why