THE PHILIPPINES will receive $2.8-billion worth of Special Drawing Rights (SDRs) from the International Monetary Fund (IMF), as part of the latter’s efforts to help countries recover from the coronavirus pandemic.

The IMF said in a statement it distributed around $650 billion in SDRs — the largest in its history — to its members on Monday.

“The allocation is a significant shot in the arm for the world and, if used wisely, a unique opportunity to combat this unprecedented crisis,” IMF Managing Director Kristalina Georgieva said. 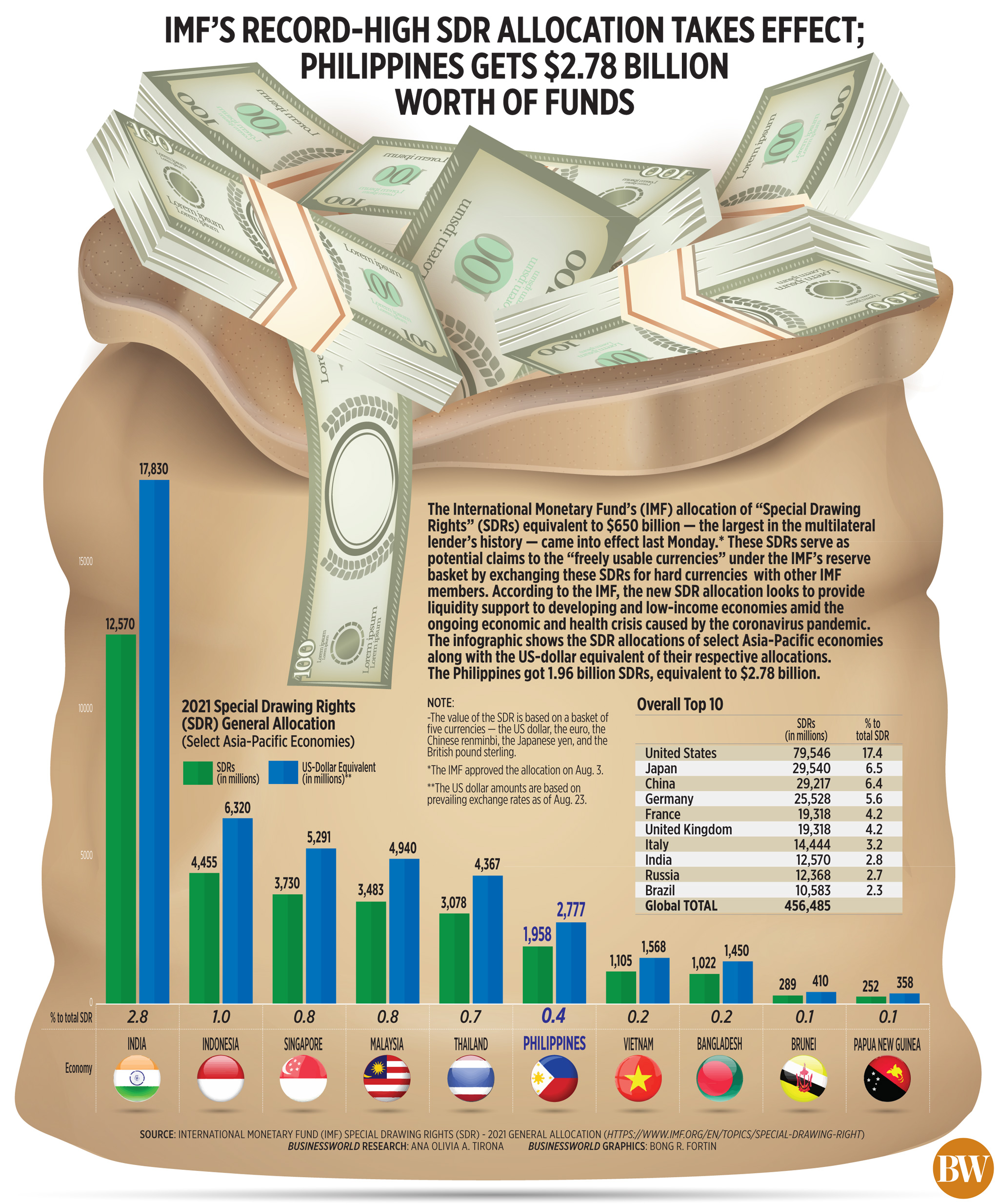 Data from the IMF website showed the Philippines gained 1.958 billion in newly allocated SDRs on Monday. This is equivalent to about $2.777 billion, based on a social media post by the IMF Asia and Pacific.

Prior to the new allocation, the Philippines already has 837.964 million in SDRs with the IMF, bringing the cumulative total to $2.795 billion.

Member countries were allocated SDRs — the fund’s unit of exchange backed by dollars, euros, yen, sterling and yuan — in proportion to their quota shares in the IMF. The SDR valuation is calculated daily and was at $1.41847 each as of Aug. 23, based on IMF’s website.

“The SDR allocation will provide additional liquidity to the global economic system — supplementing countries’ foreign exchange reserves and reducing their reliance on more expensive domestic or external debt. Countries can use the space provided by the SDR allocation to support their economies and step up their fight against the crisis,” Ms. Georgieva said.

Around $275 billion of the SDRs will go to emerging and developing countries, of which low-income countries will receive about $21 billion, the IMF said.

“SDRs are a precious resource and the decision on how best to use them rests with our member countries. For SDRs to be deployed for the maximum benefit of member countries and the global economy, those decisions should be prudent and well-informed,” Ms. Georgieva said.

In a guidance note issued in July, the IMF said that countries can tap the newly allocated SDRs to boost reserve buffers in order to ease external financial constraint and to lower borrowing costs. These may also be exchanged into usable currencies for countries with liquidity constraints and those needing to finance additional spending during the crisis.

“Countries will need to address policy challenges related to the pandemic to prevent extended scarring, including from an increase in poverty, while being mindful of containing external financing needs and managing debt vulnerabilities,” the IMF said.

“Any use of SDR holdings should be consistent with debt sustainability and be implemented in the context of a well-defined and announced medium-term fiscal plan,” it added.

Data from the Bangko Sentral ng Pilipinas (BSP) showed that the country’s gross international reserves (GIR) as of end-July was at $106.548 billion, of which $1.221 billion was in the form of SDRs.

The BSP projects the country’s foreign exchange buffers to reach $115 billion by end-2021.

“The SDR infusion will help shore up the external position of the Philippines which will go a long way to helping provide financial stability for emerging markets like the Philippines. We expect the peso to receive a short-term boost with the $2.77-billion SDRs expected to boost confidence in the country’s external buffers,” Mr. Mapa said in an e-mail.

To spend their SDRs, countries would first have to exchange them for underlying hard currencies, requiring them to find a willing exchange partner country. — Luz Wendy T. Noble with Reuters

Gov’t keeps Alert Level 1 for NCR and most areas