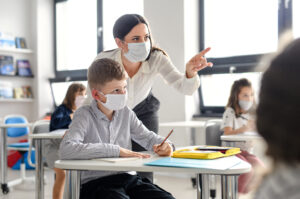 Schools will be expected to introduce facemasks or testing for all pupils rather than being allowed to close or send pupils home.

From the start of term they will work with public health officials, who will be told to ensure that schools are not “overzealous” if there are outbreaks.

The Department for Education suggested yesterday that schools should strive for a return to normality, with plays, sport and musical performances, and the scrapping of bubbles.

But head teachers predict that infections will soar and have criticised “confusing” guidance issued by the government that relies on schools knowing who has been in contact with whom, even though they are no longer supposed to track and trace children.

Some schools have already started testing pupils for the coronavirus. However, many secondary heads say the first week of lessons will be disrupted by the expectation that all pupils will be tested twice on site, three to five days apart.

Guidance published by the DfE yesterday said that schools and colleges should do everything they can to minimise the impact of outbreaks on education and attendance. This could include increased testing, the temporary reintroduction of face coverings and restricting attendance as a “short-term measure and only as a last resort”.

Pupils will still have to attend school if they live with someone suffering from Covid-19 and stay home only if they test positive themselves.

Close contacts will be identified via NHS Test and Trace and education settings are no longer expected to undertake contact tracing — however, they will have to alert public health officials if more than five children or staff who have been in close contact test positive, or more than 10 per cent of a “group that has mixed closely”.

The guidance also says that schools can test pupils before the start of term so there should not be delayed starts.

Head teachers said the government underestimated the logistics of testing all children at secondary schools.

Paul Whiteman, general secretary of the National Association of Head Teachers, said: “The government has once again asked secondary schools to in effect transform themselves into coronavirus-testing centres . . . The reality is that there is very little in the way of meaningful support being provided for these schools and so most are having to re-deploy existing staff to oversee these complex arrangements.”

Desmond Deehan, chief executive of two schools in southeast London, said: “We are ready to support local health colleagues but we are doubtful that track and trace will be able to operate effectively without schools being involved.” His schools are not operating bubbles but will retain some measures from last term, including keeping age groups separate at lunchtime.

Schools in Leicester usually go back a week earlier than the rest of England. They include Manor High School, whose head, Liam Powell, said that Year 7 would be in from today with others returning over the next week. He said: “All will be tested on arrival. We require further clarity around the guidance relating to 10 per cent mixing.”

One head who did not want to be identified said: “We are testing all of Year 7 on site on the day before the start of term but we aren’t testing the other students; just asking them to continue doing it at home. It seems pointless bringing them in when the process is voluntary anyway. On the issue of public health, the thresholds are too high and I can’t see how liaison with public health will work if schools aren’t meant to be identifying close contacts.”