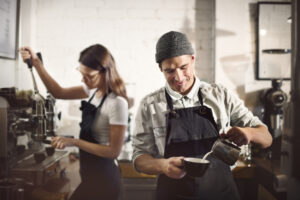 Employers’ desire to hire new workers is close to record highs in a sign that staff shortages will persist into the autumn, a survey suggests

A net balance of 29 per cent of businesses told the Recruitment & Employment Confederation that they plan to expand their workforce and invest in their operations, down only four percentage points from the previous rolling quarter’s record high.

Demand for workers has risen considerably as the economy has emerged from lockdown, with businesses in certain sectors now struggling to fill key positions. The figures suggest that recruitment challenges will persist for some time. yet.

A net balance of 22 per cent of respondents said they plan to take on permanent staff and 26 per cent said they will take on more temporary staff.

Neil Carberry, chief executive of the REC, said: “We’re well into the recovery now and our surveys show that demand for labour remains high. Even with a large number of people coming off furlough in August and September, it’s likely that high demand for workers will continue to cause shortages through the autumn.

“There will be particular pressures in logistics, food manufacturing and hospitality as we gear up for Christmas, and hiring for this period has already started.”

The challenges are more acute in some parts of the country. Hiring intentions were strongest in the north of England, where a net balance of 30 per cent plan to increase their headcount over the coming year. For the south of England, excluding London, the figure was the lowest at 22 per cent.

The REC warned that labour shortages could limit business and economic growth in the months to come. Business surveys suggest that this is already happening with economic activity suffering as companies are struggling to step up production because of labour and material shortages.

If I’d invested in Centrica shares a year ago, here’s how much I’d have now

How to make passive income from UK shares