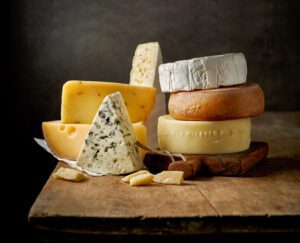 A survey of 2,000 adults by food takeaway platform Foodhub has produced a stunning revelation: the UK’s favourite cheese isn’t cheddar, Red Leicester, or Stilton, but instead the generic processed cheese slice.

According to Foodhub, 40% of Brits prefer this so-called ‘plastic cheese’ over both British classics and European stalwarts like halloumi, feta and mozzarella. Beyond the bemusing headline, however, there is a sad reality facing British cheesemakers: namely, that the trend towards ever more homogenised mass-market products is driving a decline in interest in artisanal cheeses and other traditional culinary products.

Sadly, this phenomenon is by no means limited to the UK. Across the Channel, producers of some of the most legendary European cheeses are up in arms over a front-of-pack nutritional labelling (FOPL) system which assigns their flagship traditional products with negative marks, encouraging consumers to limit their consumption all while artificial alternatives receive higher grades. Cheesemakers in France, Italy, and across Europe are now speaking out against this ‘Nutri-Score’ system, which was designed by French nutritionists but builds on the colour scheme first put forward by the UK’s own traffic light system.

The strain on British cheesemongers

While groups like the National Obesity Forum have already called on Boris Johnson’s government to ditch Britain’s traffic lights and adopt Nutri-Score instead, the French labelling scheme isn’t yet the most immediate concern for British cheesemakers.

Even though the UK now produces more varieties of cheese than France, the industry has been hard-hit by the one-two punch of the Covid-19 pandemic and Brexit. Cheese exports to the EU have slumped by two-thirds since last year, from £151 million in the first quarter of 2020 to just £42.8 million for the same period in 2021.

While the US suspension of tariffs on Stilton and a 17% increase in exports to Asia and Oceania have helped to shore up the industry, customs delays, bureaucratic hurdles, and increased trade costs mean British cheesemakers have paid a substantial price for Brexit, amidst £2 billion in lost EU exports for the UK food and drink industry overall. The sheer amount of red tape now involved in exporting led the Cheshire Cheese company to suspend its direct exports of artisanal cheddar cheeses to Europe altogether.

These developments mean smaller local producers are now hugely – if not wholly – reliant on the smaller local British market, much of which is apparently more interested in orange burger cheese than in cave-aged cheddar. With similar shifts taking place across Europe, healthier and more traditional options are being forced to fight to be recognised as such.

Nutri-Score: not a label of love

Much as in the UK, the 30% decline in exports to British consumers after Brexit and a dramatic slowdown in sales dueto restaurant closures rendered 2020 a particularly arduous year for EU cheesemakers. Even as the industry struggles to get back on its feet, however, one of the initiatives detailed in the European Commission’s Farm to Fork Strategy – which ostensibly seeks to “make food systems fair, healthy and environmentally-friendly” – could soon represent an additional threat.

As part of Farm to Fork, the European Commission intends to propose a harmonised front of pack nutritional label (FOPNL) for use Europe-wide by 2022. Nutri-Score – one of a few major contenders under EU consideration – stands accused of villainising cheeses and other traditional products, despite being promoted by the French government.

Nutri-Score amalgamates information on fat, sugar, and salt content per 100g/ml of a given foodstuff, weighing them against fruit and vegetable content and nutrients like fibre and protein to grade foods on a scale from a green A to a red E. Nutri-Score labels have already been rolled out across several countries by food giants such as Carrefour, Kellogg and Nestlé, with major brands taking advantage of the Nutri-Score algorithm to reformulate their products and earn better marks. Traditional cheese producers have been far less enthusiastic, since the algorithm Nutri-Score uses penalises 80% of all cheeses by branding them with a D, if not a glaring red E.

From Roquefort in France to Spanish Manchego, opposition to Nutri-Score is not difficult to understand when one considers protected-origin cheese producers cannot modify their recipes or replace ingredients. These cheesemakers also argue Nutri-Score’s algorithm overlooks the nutritious compounds in their cheeses, including not just proteins but also calcium, fatty acids, fat-soluble vitamins, and amino acids.

In recent months, three major Italian cheese consortia representing the protected-origin producers of Parmigiano Reggiano, Grana Padano and Asiago have been particularly vocal in opposing Nutri-Score. These Italian producers state the mandatory introduction of Nutri-Score across Europe would go against the very purpose of the ‘protected designation of origin’ (PDO) label they have been assigned by the EU itself.

Unlike processed cheese slices, whose ingredients are a mystery to most, Italy’s favourite aged Parmigiano Reggiano (or parmesan) cheese has just three ingredients: cow’s milk, sea salt, and rennet. The strict regulations imposed on parmesan producers mean no additives or preservatives are permitted, and thanks to its umami properties, parmesan is commonly grated onto other dishes as a low-sodium substitute for salt.

As an alternative to Nutri-Score, European cheesemakers and producers of other traditional EU products (such as olive oil and charcuterie) are looking towards alternatives such as Italy’s homegrown FOPNL Nutrinform Battery, which paints a more balanced picture of nutritional content by individually displaying nutritional information on the energy, (saturated) fat, salt and sugar content of a given food per portion size.

While it will take more than a label to save Europe’s PDO cheeses amidst global economic disruptions and shifting consumer trends, the Nutrinform Battery at least promises to do no harm – something Nutri-Score cannot claim.