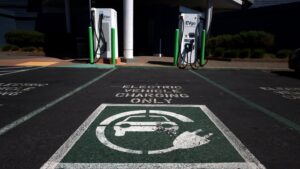 Shell has announced its aim to install 50,000 on-street electric vehicle (EV) charging points in the UK over the next four years, in an attempt to provide a third of the network needed to hit national climate change targets.

Earlier this year, the energy company acquired ubitricity, a leading supplier of local authorities’ on-street EV power points, with a network of 3,600 chargers in lamp posts or bollards.

The paucity of on-street charging in urban areas has been seen as a significant obstacle in the government’s drive to phase out fossil fuel vehicles in favour of electric cars. The sale of new petrol and diesel cars will be banned from 2030 in the UK.

Shell will entice local authorities by offering to meet the upfront costs of installation that are not covered by government grants, subject to commercial terms. The government’s Office for Zero Emission Vehicles currently pays 75% of the installation cost.

According to a National Audit Office report into reducing carbon emissions from cars, more than 60% of urban households in England do not have off-street parking, with the number rising to 68% for social housing.

Shell’s UK chair, David Bunch, said: “It’s vital to speed up the pace of EV charger installation across the UK and this aim and financing offer is designed to help achieve that. We want to give drivers across the UK accessible EV charging options, so that more drivers can switch to electric.”

The transport minister, Rachel Maclean, said the announcement was “a great example of how private investment is being used alongside government support to ensure that our EV infrastructure is fit for the future”.

The UK Committee for Climate Change’s progress report to parliament in June recommended as a priority there should be 150,000 public charge points in operation in the UK by 2025 to ensure they would be widely available across the country.

Shell has targeted global growth from 60,000 charge points today – including on fuel station forecourts and commercial premises – to about 500,000 by 2025. BP had previously stolen a march in the UK electric charging business, after snapping up Chargemaster in 2018.

The oil company, which has been regularly targeted by climate crisis campaigners in recent years, has pledged to invest heavily in greener businesses and become net zero by 2050.

This week Extinction Rebellion activists glued themselves to the Science Museum in London in protest against Shell’s sponsorship of an exhibition about greenhouse gases.

Two-thirds of UK’s top restaurants in the red after Brexit, Covid and inflation

Charities go door to door to capitalise on home working