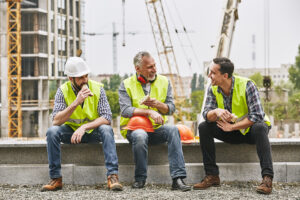 Subcontractors across the UK are struggling to take advantage of the economy reopening due to supply chain issues, which are causing a shortage of raw materials, according to a new survey.

Despite exactly half of businesses seeing an increase in activity since restrictions began to be lifted in the UK and less than one in ten reporting a reduction, shortages in skilled labour and rising material costs threaten to dampen long-term growth. Almost six in ten subcontractors warned that the increasing cost of raw materials is the biggest concern to their business, while 44% listed a shortage of skilled labour. This is no surprise as the UK has seen record increases in the price of steel, plastic and concrete, with plywood doubling in cost in just six months.

Since the onset of Covid-19, four fifths of SMEs took some form of action to protect their business, including furloughing staff, accessing a government loan, or stopping operations entirely for a period. In addition, Brexit continues to prey on the mind of many. Over half of the sector want the Government to do more to ensure that tariffs on goods to and from the EU are avoided, to avoid a further increase in the price of raw materials.

Sharon Wiltshire, Head of UK Operations at Bibby Financial Services,who commissioned the survey commented: “It has been a difficult year for the construction sector, and for subcontractors especially. SMEs, which make up the bulk of the sector, have shown incredible resilience in the face of protracted challenges. However, it is likely that the true impact of Brexit-related skills and raw materials shortages, and the winding down of Government support measures, is yet to be realised.

“With subcontractors typically asked to pay a large proportion of labour and materials costs upfront they are highly dependent on having a working level of cashflow at all times. While we are seeing twice as many businesses use Invoice Finance compared to 2019, over four in ten still do not leverage external funding to support their operations. As Government loans come to an end, SMEs need to think proactively about the finance options they have available to manage rapidly changing costs, and plan for growth.”

To offset the shortage in raw materials, four in ten have looked for new suppliers, while a quarter have either secured new suppliers or renegotiated with existing partners. However, almost half have taken no such action and are prepared to pay more with existing suppliers, which may prove more damaging to their bottom line in the long term.

Peter Vinden, CEO of Gateley Vinden, commented: “The sector needs to recognise that the landscape has fundamentally changed in the last 12 months. The price of raw materials is rising dramatically, and traditional fixed price contracts aren’t designed to account for this new reality. The rigidity of these contracts means that as prices rise, subcontractors and contractors are forced to shoulder the costs of materials themselves, while the main contractor is insulated.

“We’re seeing a rise in contract disputes already, and if the sector doesn’t begin to approach contract negotiation differently, this number will likely continue to rise.”

Two-thirds of UK’s top restaurants in the red after Brexit, Covid and inflation

Charities go door to door to capitalise on home working