THE NUMBER of jobless Filipinos declined to 3.073 million in July, but job quality remains a concern as more employed Filipinos are still seeking additional work, the Philippine Statistics Authority (PSA) reported on Tuesday.

Preliminary results of PSA’s July 2021 round of the monthly Labor Force Survey (LFS) showed the unemployment rate at 6.9% in July, down from the previous month’s 7.7% which translated to 3.764 million jobless Filipinos. This was also lower than the 10% jobless rate in July 2020, when 4.569 million did not have work.

The July unemployment rate was the lowest since the 5.3% logged in January 2020. 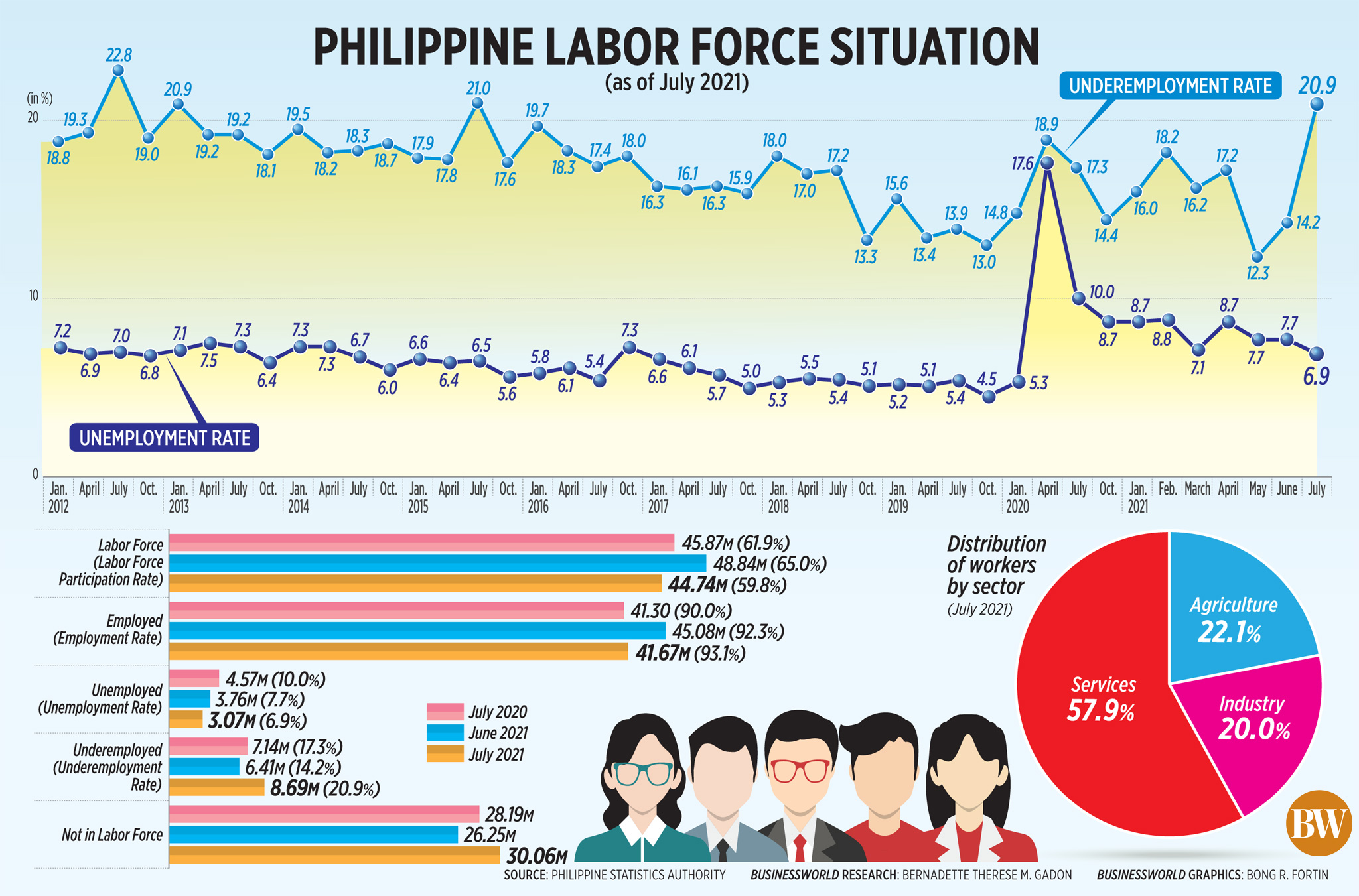 On the other hand, the underemployment rate — the proportion of those already working, but still looking for more work or longer working hours — worsened to 20.9% in July from 14.2% in June and 17.3% in July 2020.

The latest figure translates to 8.692 million underemployed Filipinos, up from 6.409 million the previous month and 7.136 million last year.

“A significant improvement was seen in the National Capital Region (NCR), where the unemployment rate dropped from 14.4% in April 2021 to 9.0% in July 2021 as the quarantine restrictions were eased from modified enhanced community quarantine to variations of the general community quarantine from May 15 to July 31. Moreover, in areas outside NCR, the unemployment rate also improved from 7.9% to 6.5% in the same period,” Socioeconomic Planning Secretary Karl Kendrick T. Chua, Department of Finance Secretary Carlos G. Dominguez III and Department of Budget and Management Officer-in-Charge Tina Rose Marie L. Canda said in a joint statement.

“[D]espite the improved unemployment rate, the reduction in the labor force participation rate… resulted in a net job loss of 3.4 million from June to July, bringing total employment to 0.8 million below pre-pandemic level,” the economic managers said, adding majority of those who left the labor force cited concern over the coronavirus disease 2019 (COVID-19) as the reason for not currently working.

The employment rate went up to 93.1% in July from 92.3% in June. However, this was down in absolute terms with 41.667 million employed Filipinos in July compared with 45.075 million in June, as the decline in employment was offset by the shrinking size of the labor force.

The service sector made up 57.9% of the total employment in July, slightly up from the 57.6% in June. The industry sector likewise saw its employment rate go up to 20% during the period from 18.1%.

“Around 1.8 million of the month-on-month job loss came from the vulnerable agriculture sector, as Typhoon Fabian hit the country around mid-July, destroyed some P700-million worth of output, and affected multiple regions from Northern Luzon down to Western Visayas,” the economic managers said.

In an e-mail, Bank of the Philippine Islands (BPI) Lead Economist Emilio S. Neri, Jr. said the latest jobs data were “not surprising” as the economy has “clearly lost its recovery momentum from the community quarantines implemented from March to May.”

In a separate e-mail, ING Bank N.V. Manila Senior Economist Nicholas Antonio T. Mapa said latest results indicate that although jobs were created, workers may not have been able to get enough work hours due to lockdown restrictions or muted economic demand.

“Firms may likely be operating on staggered shifts or may have opted to operate in sets or teams to limit the spread of the virus, which in turn capped the number of hours available to workers,” he explained.

For Asian Institute of Management economist John Paolo R. Rivera, the persistence of the pandemic makes the employment situation “unstable” given the continued restrictions that forced firms to downsize, restructure, or shut down.

“If such a situation continues, no significant improvements in the labor market figures/conditions can be expected,” he said in an e-mail interview.

ING Bank’s Mr. Mapa was also less optimistic. “NEDA (National Economic and Development Authority) admitted that the labor market will be challenged and unemployment will stay between 7-9% over the next two years. Given how sluggishly the economy is operating, we do not expect jobs to be created fast enough to satisfy demand and we agree that unemployment and underemployment levels will stay quite high in the medium term,” he said, referring to the government’s updated Philippine Development Plan 2017-2022 approved by the NEDA board in early January.

“We expect the labor market to only completely recover and revert to the pre-COVID average of 5.4% by mid-2023, which should also be the time we can expect the Philippines to return to 2019 GDP (gross domestic product) levels,” he added.

BPI’s Mr. Neri said the economy and labor market are expected to return to pre-pandemic levels “more likely in late-2023, if not early-2024” as demand for jobs in high-contact services remains subdued.

“We think we will see the same [underemployment rate of 6.9%] by the end of the year, but with a higher participation rate and a lower underemployment print. We are assuming here that there will be no more ECQs until end-2021 and that the economy can reopen again as the majority of elderly Filipinos will have already been vaccinated by then,” he said. — Abigail Marie P. Yraola