Yes, I would say as consumers, we should worry about fish price inflation. Not only us consumers, but the Duterte administration as well, because fish prices, together with pork prices, have been among the biggest components driving consumer price inflation, which has surged to 4.9% last August.

Food price inflation also has political ramifications and with the two sources of protein for Filipinos (pork and fish) seeing above average price increases and elections just months away, the Duterte administration may have something to worry about. 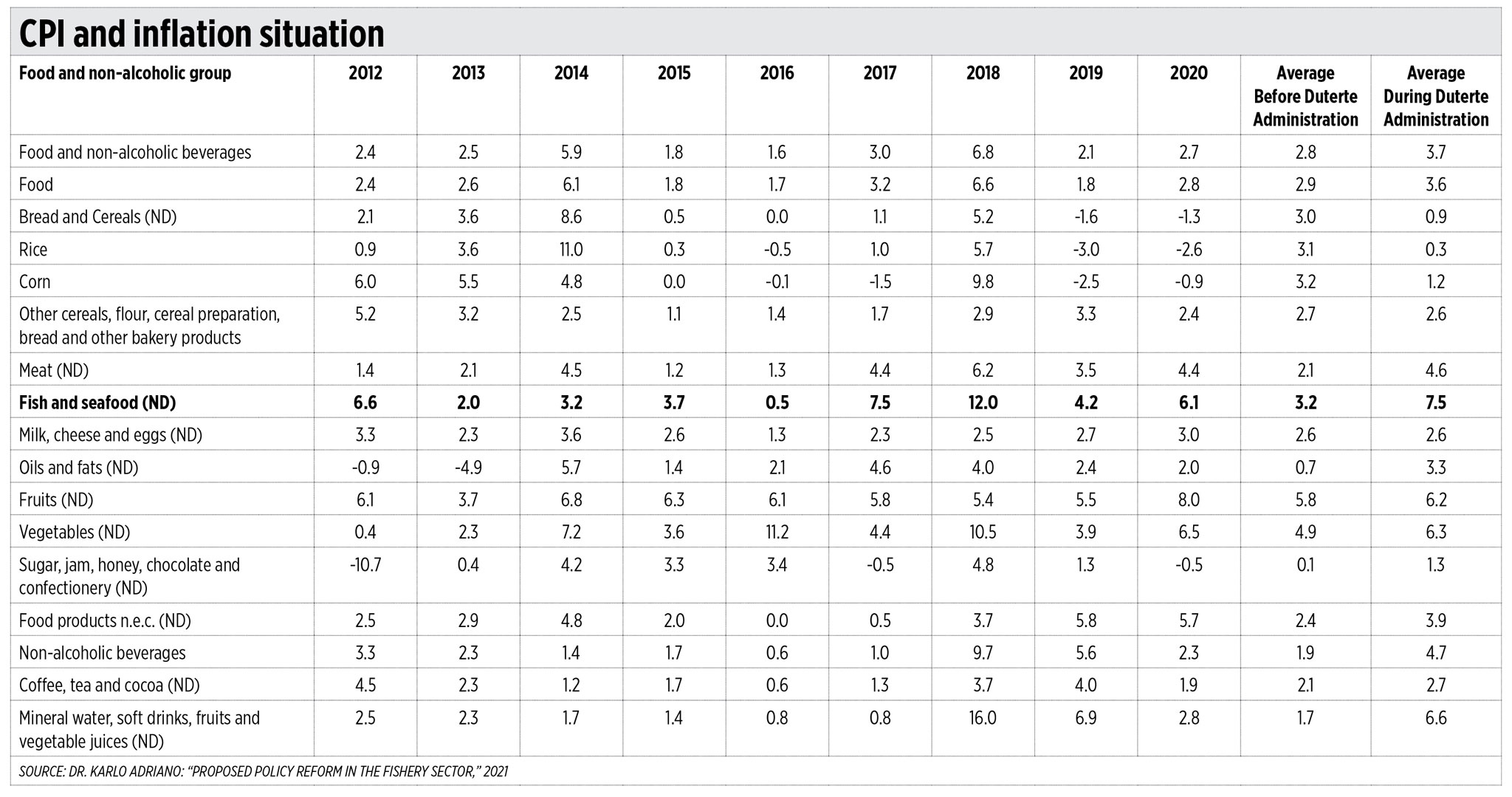 I would like to state outright that I’m drawing heavily on an excellent study by Dr. Karlo Fermin Adriano, on “Proposed Policy Reform for the Fishery Sector: Promoting Greater Efficiency and Stability.”

I also had an opportunity to interview him. There are very few economists studying the fisheries sector and I’m glad that Dr. Adriano has chosen fisheries as a field of study. We are an archipelagic country, and we should have a “blue” or marine economy, but the fisheries sector gets scant attention.

Well, there’s bad news for the fisheries sector. Fish output is declining and will probably decline more in the future. According to Dr. Adriano, catch per unit of effort (CPUE), is declining for pelagic and demersal fish in the Philippines. This is true, whether for hook and line or for commercial fisheries.

The reason is clear: the sea commons is overfished. Too much fish being caught doesn’t allow for the regeneration of the fish population.

With increasing population and decreasing supply of fish, the country faces severe annual shortages of fish. Galunggong, the poor man’s fish, is short by 400,000 metric tons (MT) per year. Tilapia by 200,000 MT and bangus (milkfish) by 228,000 MT.

According to Dr. Adriano, the per capita demand for fish outstrips the per capita supply for all fish commodities (except tuna). The only reason fish prices didn’t increase as much, given the supply shortfall, is that importation of fish for the wet market was allowed in 2018 under Fisheries Administrative Order (FAO) 259. The increased supply in 2018-2019 helped mitigate fish price inflation.

So, what’s the problem? The problem, as always, is government. The government, through QRs or Quantitative Restrictions, regulates the importation of fish. The government is incompetent (vis-à-vis the market) in determining the exact number of fish to be imported, the timing of the importation, and who gets the permits to import.

Moreover, the Bureau of Fisheries and Aquatic Resources (BFAR) added several non-tariff barriers (NTBs) to FAO 195 importers, which are the processors, canners, and institutional buyers.

With QRs, there’s also a great danger of the bureaucracy colluding with the cartels (given the list of FAO 259 importers is relatively small) to keep prices high. For example, the National Economic and Development Authority (NEDA) believes that the shortage for the last quarter of 2021 and the first quarter of 2022 will be around 200,000 MT of fish. However, the BFAR is going to allow the importation of only 60,000 MT during the coming Christmas season, when demand is high. This will hurt consumers and benefit only a select group of traders.

Obviously, this system when the government acts as the God of the market is inefficient, impractical, and prone to manipulation.

Government should instead learn from the positive lessons of the RTL (Rice Tariffication Law). RTL removed the corrupt administration of rice importation from the National Food Authority, allowed free importation by the private sector but generated revenue through tariffication. The result? Rice inflation is no longer a factor in the CPI. Rice prices are more stable, benefitting 110 million consumers. Contrary to the scary scenarios portrayed by the RTL opponents, Filipino rice farmers didn’t go bankrupt but instead increased their efficiency and productivity.

Similarly, government should abolish all quantitative restrictions on the im     portation of fish and allow the market to determine equilibrium. Consumers, and not traders or bureaucrats, will benefit. Free trade will give us fish security. In fact, the policy on free trade should apply not only to fish but also to all agricultural commodities.

In the medium-term, Dr. Adriano believes that given the declining catch from overfished waters, both locally and internationally, aquaculture is the way to go. However, aquaculture comes with its own set of issues, such as environmental pollution, sourcing of fish fry, land use, etc. and therefore, the government must develop and execute a plan, together with the LGUs (Local Government Units) that will lead to the growth of aquaculture and our fish security without the negativities associated with it.

Moreover, the government must put the proper infrastructure in place, such as fish ports and cold chain facilities, if aquaculture is to grow and become a bigger source of domestic fish supply.

With many Filipinos going hungry from massive unemployment and underemployment due to the pandemic, rising food prices will hit poor Filipinos doubly hard. This is because low-income households are spending a higher share of their total income for food compared to the middle- and upper- income classes. Not only would diminished incomes lead to less food on the table, but higher food prices will force the poor to cut back even more.

The Duterte administration should indeed worry about fish price inflation. No amount of trolling can erase the grumbling of voters’ empty stomachs.

Calixto V. Chikiamco is a member of the board of the Institute for Development and Econometric Analysis (IDEA).