The Asian Development Bank (ADB) is planning to acquire coal power plants in the Philippines, Vietnam, and Indonesia, and retire them early, to be replaced by renewables like biomass, solar, and wind. This a joint lobby by European countries and four private finance institutions — Prudential UK, Citi, HSBC and BlackRock.

The Department of Finance (DoF), the Philippine Institute for Development Studies (PIDS), and many environmental NGOs jumped in to support the ADB plan. These institutions and groups are blind to certain facts so they made that irrational proposal.

One, they repeatedly bully smaller Asian economies like the Philippines, Vietnam, and Indonesia but not China and India. For instance, the combined coal consumption of these three countries in 2019 was 6.21 exajoules (1 EJ = 277.78 terawatt-hours), which was only 33.4% of India’s and 7.6% of China’s coal consumption.

Four, in comparison also with two other European countries, Poland and Turkey, that keep their coal consumption high, their GDP expansion was 3.7 times to 9.6 times from 1990 to 2019 (see Table 1). 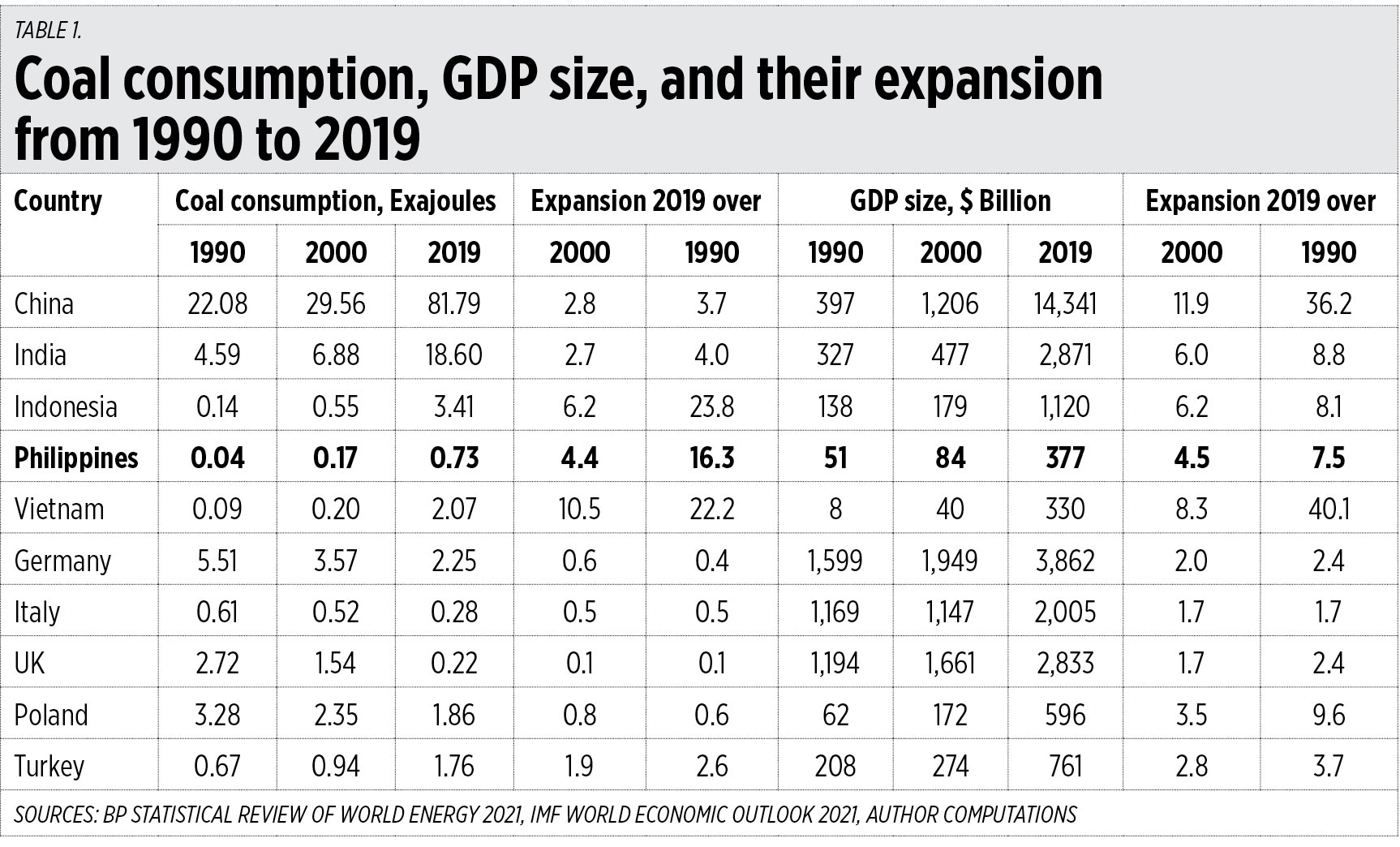 The ADB plan, when finally implemented, will not happen right away, of course. It will take several years. But ADB and its partners will appear hypocritical about their pronouncements on economic recovery. How can countries have sustained economic recovery when there are frequent blackouts, with the big manufacturing plants, hotels, and malls running their own gensets? At night, more blackouts mean more road accidents, more rapes, murders, and other crimes.

Last week, this column discussed the 2022 budget and huge borrowings (https://www.bworldonline.com/budget-2022-borrowings-and-octa/, Sept. 6). We follow this up with the huge budgetary subsidy of many government corporations — they are supposed to contribute to the national treasury but are seeking high taxpayers’ subsidies instead. For instance, the Social Security System (SSS) and the Land Bank of the Philippines (LBP) got subsidies of P51 billion and P38 billion in 2020.

The subsidy to Department of Energy (DoE) corporations are nearly six times the budget of the DoE itself. Many losing and failing private electric cooperatives are being subsidized by taxpayers via the higher budget allotted to the National Electrification Administration (see Table 2). 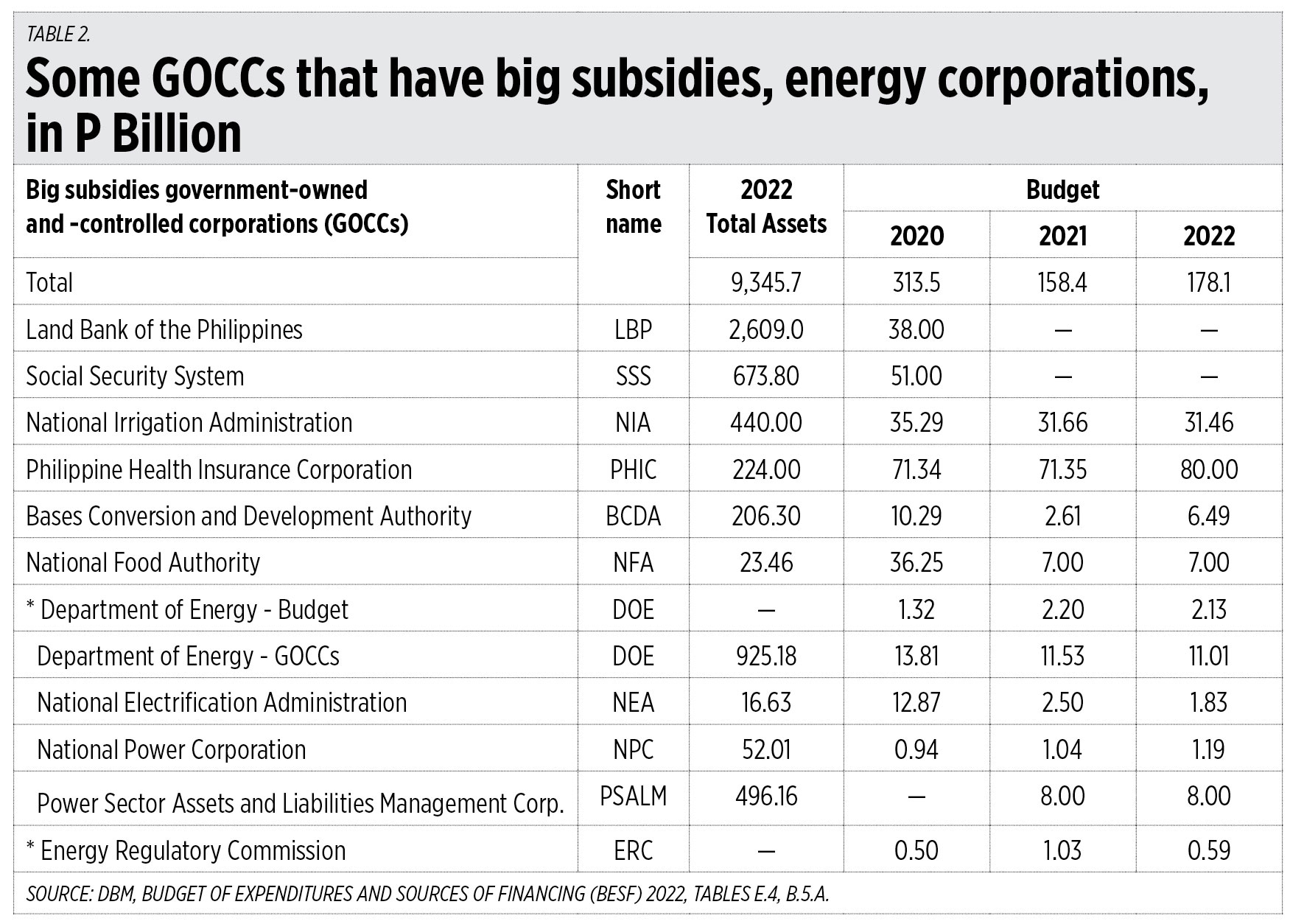 The Power Sector Assets and Liabilities Management Corp., better known as PSALM, is supposed to bring more billions to the Treasury via the privatization of the remaining government-owned power plants, but instead, PSALM will seek P16 billion this year and next year. Why?

The Energy Regulatory Commission (ERC) is very strict in regulating the competitive power generation sector, but is lax when it comes to huge monopoly power transmission. There are many transmission issues, newly commissioned power plants that are not sufficiently connected to the grid, and yet the National Grid Corporation of the Philippines (NGCP) hardly gets a strict warning or regulations from the ERC.

One alternative is to have large-scale privatization of many government corporations. Candidates are those listed above, and others with huge total assets (2022 levels): the National Transmission Corp. (TransCo), P324.86 billion; the Development Bank of the Philippines (DBP), P1.16 trillion; and the Government Service Insurance System (GSIS), P1.607 trillion.