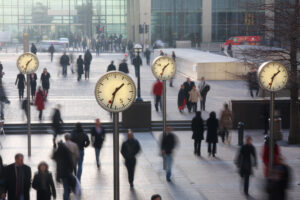 More Europeans are looking for work in Britain since the end of lockdown restrictions, but job searches from the Continent remain far lower than they were before the pandemic.

In a promising sign for businesses grappling with staff shortages, searches from inside the European Union for positions in Britain have risen steadily since hitting the floor in April last year, according to Adzuna, a jobs search engine.

Researchers said that there had been a step-change in the number of searches in the hospitality industry in April and May as restaurants and pubs reopened.

The number of EU residents seeking work in Britain is 48 per cent lower than it was in August 2019, but the trend is rising. In January, when the UK was in the middle of lockdown, searches were 66.7 per cent below pre-pandemic levels, according to Adzuna.

The company’s data is used by the Office for National Statistics in its real-time labour figures and is studied by the Bank of England.

The flow of migrant labour from the EU dried up during the pandemic as many workers returned home. Estimates from the ONS suggest that the EU population in the UK fell by 100,000.

Their absence is being felt in sectors including logistics and hospitality where employers are struggling to find staff. This is putting pressure on wages, which benefits UK workers but is causing disquiet in the business community. Many sectors want the government to ease immigration policy.

The shortages are becoming a concern for the Bank of England. Last month Andrew Bailey, the governor, said that the “challenge of avoiding a steep rise in unemployment has been replaced by that of ensuring a flow of labour into jobs”.

The Bank has stated that unemployment, which was 4.8 per cent at the end of May, has peaked. Many economists are more fearful of a surge in inflation than a rise in unemployment.

Renewed interest from migrant workers is not keeping pace with the rapid increase in demand for workers. Vacancies are rising at a record pace and sectors that rely heavily on migrant workers are still struggling with a shortfall of EU workers.

“There are over one million roles still unfilled in Britain this month and there is clearly a lingering supply and demand imbalance in place,” Adzuna said.

The recovery is being led by jobseekers from Spain, where searches are down by 45.8 per cent but are up from a 65.2 per cent drop in January. France is lagging, with job searches still down 58.4 per cent. This is up from 64.7 per cent in January.

Andrew Hunter, co-founder of Adzuna, said: “It’s been tough going for UK employers looking to hire staff in the first half of this year. The combined effects of the pandemic, travel restrictions and the furlough scheme have led to a significant supply and demand imbalance in the job market.

“But there is hope for companies recruiting this month and into the autumn. Adzuna’s latest data covering the first seven days of this month shows a swell in jobseeker activity from the UK and overseas. As kids go back to school and border restrictions ease, we anticipate jobseekers flooding back into the market.”