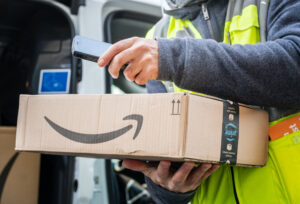 The Post Office, which has been helping to deliver Britain’s mail since the 17th century, is to begin handling packages for Amazon, the great delivery disruptor of the 21st century.

The tie-up comes as a fresh challenge to Royal Mail’s former monopoly and could tempt even more UK consumers to shop at the American group’s vast online marketplace.

The Post Office is throwing off its shackles with Royal Mail and has signed a click-and-collect contract with Amazon, the world’s largest internet shopping and delivery company. By Christmas, 1,500 of the Post Office’s 11,500 outlets will offer pick-up and drop-off services in which customers can either take delivery of or send parcels with Amazon. The arrangement, which will be launched nationally next year, comes after six months of successful trials in 200 post offices.

“The world’s leading ecommerce company appreciates the value of working with the Post Office and the high level of customer service you provide day-in and day-out,” Nick Read, the Post Office chief executive, told postmasters in a video announcing the deal. “It is helping us develop a proposition that is effective and efficient for our customers and our postmasters.”

The Post Office and its in-store counters is the taxpayer-subsidised, historically loss-making company that stayed in the state sector after it was separated from Royal Mail, which later was floated on the stock market.

Boosted by the rapid acceleration in ecommerce during the pandemic, the internet shopping home delivery market could be worth an additional £100 million a year on top of the Post Office’s annual £1 billion revenues.

Of the Amazon and DPD deals, a Post Office spokesman said: “These complement our long-term partnership with Royal Mail.”

Amazon has responded to the surge in online shopping by dramatically increasing its British workforce. It is aiming to create 10,000 new permanent jobs this year, lifting its UK headcount to 55,000. At end of 2019, it employed 30,000 people in Britain.