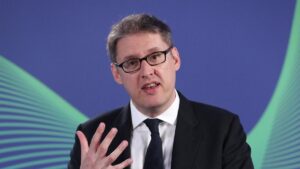 Higher taxes on business will suffocate investment and damage economic growth, the head of the country’s biggest employer group will warn today in a stinging criticism of the £12 billion increase in national insurance.

Tony Danker, director-general of the CBI, will say he is “deeply worried the government thinks that taxing business is without consequence to growth”. Unless firms are given the incentive to invest, Britain risks falling further behind other leading nations, he warns.

Last week the government outlined plans to raise £12 billion a year from an increase in national insurance contributions and dividend income to pay for health and social care. About £6.5 billion of the revenue would come from employers’ national insurance contributions, dubbed a tax on jobs, which follows the £16 billion increase in corporation tax unveiled in the March budget, when the rate was raised from 19 to 25 per cent from 2023.

“We in business believe we should pay our fair share to tackle the debts of Covid. That is why many accepted the jaw-dropping tax increase in March,” Danker will say. “But there is a real risk the government will keep turning to business taxes to carry the load and it misses a smarter way to view business taxation: to flip it on its head. If we want to kick-start the growth capital we need for the next decade, we should do so by rewarding those businesses who choose to invest.”

The CBI is urging the government to use “catalytic public investment” to draw private money as well as regulatory changes to encourage pension funds and insurers to back capital projects. Smarter taxation is needed to encourage green investment and individual training accounts should be provided to reskill those out or work.

“It’s a terrible time to be poor at investment,” Danker will say. “This decade’s growth opportunities — from AI, fintech, genomics, renewables — are in industries where success requires new investment and where other large economies are investing now.”

A Treasury spokeswoman said it had supported businesses during the pandemic through its £400 billion plan for jobs. She said: “We’ve also shown we are committed to supporting business investment, extending the annual investment allowance increase for another year and introducing the superdeduction: the biggest two-year business tax cut in modern British history.”