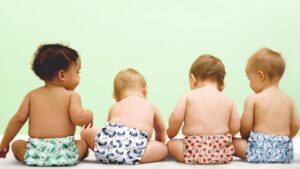 A reusable nappy brand set up by a couple 24 years ago has raised £13 million from the British Growth Fund to expand as the plastic waste caused by disposable nappies comes under political scrutiny.

The business, which is on track to make £15 million in sales this year, is Britain’s market leader and will use the money to accelerate its global expansion and marketing.

Guy Schanschieff said: “We have dealt with plastic bags, stirrers and straws, but nappies account for a third of all non-biodegradable waste that goes to landfill and are in the top 20 products found in our seas.”

Bambino Mio is sold in 90 countries, with Germany its largest market, but Schanschieff said that Brexit had meant more paperwork and a financial dent from double duty.

About three billion nappies are thrown away every year in the UK, accounting for 2 per cent to 3 per cent of all household waste, according to Wrap, a recycling charity. Last month it was reported that the government was considering introducing a “nappy tax” to combat the amount of waste being dumped and to push parents to consider greener alternatives.

Schanschieff disagreed. “We have too much child poverty in this country already and that just puts extra taxes on parents,” he said. “It would be better to improve access to alternatives either with vouchers or promotional scheme.”