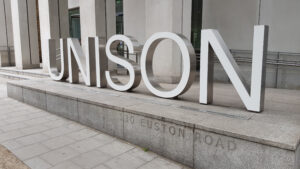 The general secretary of the UK’s biggest union has warned this could be the year of industrial action over pay as workers “feel they have had enough” with low wages, a national insurance rise and universal credit cut after working hard during the pandemic.

Christina McAnea, who took on the role at Unison in January, also told Boris Johnson that his “smoke-and-mirrors” offer on social care and the mandatory Covid-19 jab policy for care workers was putting the sector at risk of collapse, with many unvaccinated staff having already received notice they were at risk of dismissal. Up to 10% of care staff could lose their jobs because of refusing to be vaccinated by November, worsening the sector’s existing workforce shortages.

McAnea said Johnson’s promise last week of extra billions for social care funded by an increase in national insurance (NI) rates was inadequate as there was “nothing fundamentally changing” in the way care was commissioned or delivered – or raising rates of pay for staff, many of whom are on the minimum wage.

In advance of this week’s annual Trades Union Congress, she called on Keir Starmer to put forward a bolder plan of his own on social care, pressing for the Labour leader to “go further” and pledge an end to the profit-making in the sector.

Asked whether this could be a year of industrial action, McAnea said: “Is this the year? I would like to think this is the year. I do think this is the year when people feel they have had enough, particularly on the back of the pandemic, when they have put so much in in the past 18 months to be rewarded or recognised for what they’ve done with so little is shocking and just an insult to people.

However, McAnea also highlighted that it was harder than before for workers to ballot for industrial action because of the Trade Union Act 2016, which requires a turnout of 50% or more and paper ballots.

Representing 1.3 million workers, including many in the care industry, McAnea and Unison have long been warning that the sector is seriously struggling, with many demoralised by low pay rises and overwork during the pandemic.

She pointed out that many care workers earn no more than the minimum wage, meaning they would earn more at McDonald’s or many supermarkets.

McAnea, whose union supported Starmer’s leadership bid and is a major Labour donor, said the party had adopted “a lot of the policies that we’ve been pushing for about having a proper workforce strategy and looking seriously at the way care” was provided.

But she added: “We would go much further and say they should come out and say you shouldn’t be making a profit on essential care. Care is too important and it is part of the infrastructure of our society. I’d like them to be very clear on this that there shouldn’t be a profit motive in care. And a clear workforce strategy and a commitment to pay staff a higher wage.”

Labour has held off announcing a social care policy of its own, after Johnson said he would put a cap on care costs of £86,000, excluding food and accommodation, and fund this with a 1.25 percentage point rise in NI.

Starmer has attacked the plan for being “a sticking plaster over a gaping wound”, as it did not specify how it would overhaul the sector and much of the tax rise would be used to fund the NHS rather than social care in the early years.

Labour believes its approach has been vindicated, partly as polling suggests the Conservatives may have lost ground with the public because of the national insurance rise, which is due to come into force next year.

Read more:
Unison chief warns this could be year of industrial action as ‘staff have had enough’