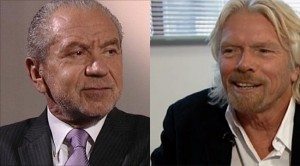 When you first enter the business personality media jungle occupied by the likes of Lord Alan Sugar from The Apprentice or the panelists from The Dragons’ Den, you will probably feel a lot like a wide-eyed schoolchild on his or her first day at secondary school.

Your business might be starting to turn over a healthy amount, but meanwhile, you have another objective, cranking up the car of your media persona and venturing onto the open motorway, perhaps without a satnav and not much fuel.

At the very start when you enter the media playground, it can be rather daunting to say the least. There’s nowhere to turn. Nowhere to hide.

Like the line from the film Alien, ‘In space, no one can hear you scream’.

From the very outset of your journey into online business blogs through to national network television and breakfast radio, no one knows your name, no one’s playing with you at break time and at worse, you might even get bullied by some of the bigger kids and told to go away.
Slowly but steadily you build up a bit of confidence in terms of adopting a few survival strategies but generally keep your head down and rather quickly work out the pecking order.
The world of business celebrities, like any other category of celebrity, has the same sort of mythic hierarchy as the dinosaurs brought back from the dead in the Jurassic Park film franchise.
In Jurassic World, ‘The Hybrid’, was a man-made concoction, a sort of ‘Super Dinosaur’ and King of all the beasts.
‘The Hybrid’ in terms of homegrown television business personalities is definitely the one and only Lord Alan Sugar. In the film franchise, ‘The Hybrid’ was far more deadly than even the Tyrannosaurus Rex introduced in the first Jurassic Park.
Sugar may be just 5 foot 7 inches tall (1.73 metres), but he certainly packs a lot of punch as King of homegrown business celebrities.
Back in 2006, I remember waiting for my client Duncan Bannatyne to arrive at a Speed Networking event for Enterprise Week hosted at the Young Vic Theatre near Waterloo. It was to feature then Chancellor Gordon Brown, Lord Alan Sugar and Duncan Bannatyne with a bunch of young would-be entrepreneurs from La Retraite School.
Lord Alan Sugar turned up in his chauffeur-driven limousine with AMS 1 personalised number plate and came striding up to the Mezzanine with his small entourage where the activity was taking place.
Gordon Brown was already there, ready and waiting for the meet-and-greet with eager-eyed youngsters.
Bannatyne was running late.
I explained when Lord Sugar came up to me I was the PR for Bannatyne but he wasn’t there yet.
“Where the f*^) is Bannatyne, he said? What’s he playing at?” he said, half joking. “Always running f&^*ing late!”

Lord Sugar saw it that he could joke and about Bannatyne, the Dragon, because from his perspective, any Dragon was well below him in terms of rank. Sugar was equivalent to head prefect.

If Lord Sugar was ‘The Hybrid’ then all of the Dragons were Tyrannosaurus Rex’s, all sitting a notch lower than Sugar in the world of fiery flesh-eating business tycoons, the biggest business personality on the block.
Then somewhat below the Dragons were the Channel 4 Secret Millionaires, which I would equate to the Raptors (although as my wife pointed out to me, The Raptors in Jurassic Park can often be more deadly, because they often work in pairs, and seem to know intuitively what the other one is thinking during the hunt), below that is the rank and file of Undercover Bosses being Deinonychus’s and so on and so forth.
The late BBC Dragon Hilary Devey was one of the rare examples of a Channel 4 Secret Millionaire migrating up the food chain to Dragons’ Den.
It wasn’t the done thing to move up to being a Dragon from Secret Millionaire, a show where millionaire’s supposedly go undercover with a full film crew and somehow dupe members of the public who want their cash handouts, just like its not the done thing to move down into a lower echelon of business programme once you’ve already been on Dragons’ Den.
You’re not ever likely to see Peter Jones, Deborah Meaden or Richard Farleigh make it on Dragons’ Den, but then go down a rung of the ladder and star on Undercover Boss. Its not going to happen.
Its somewhat like a caste system etched in stone for generations.
Breaking into all of this from an outsider’s perspective seems almost impossible at first.
But the technique to shatter the glass ceiling is infact a rather simple one.
I call it ‘F&F’. Fighting and F*(&(ing.
All drama is friction and a battle of some sort. That’s the essence of drama. It would be an enormously boring pantomime, and a rather short one, if everyone got along.
The thrill is from the spills. The goodies and baddies. The battle. The chase. The duel.
So to get ahead quick, you need to pick a fight with the biggest dinosaur in the room.
If you win against him, then you get all the treasure and get to keep the girl.
In the media battleground, you don’t generally need to spill your own blood to get ahead.
Instead its all done with narratives.
Your target can be any variety of foe. Another business personality that you pick a fight with further up the food chain. The prime minister. A group of people like ‘The Wokes’. Or an entire country such as ‘The Scots’.
Whatever way you look at it, you’re at war and on a mission to rid the world of a scourge, which is the bigger business celebrity, who you want to scalp and devour a bit of their media status for yourself.
The constant spectacle of your title fights are what ultimately keeps people intrigued, entertained and interested in the progress of your story and subsequent climb to the top.
Sir Richard Branson has one of the very best examples of punching hard above his weight. Back in 1993, the expansive British Airways had to apologise and pay £610,000 libel damages and an estimated £3 million bill for legal costs against its very small rival, Virgin Atlantic Airways over a “dirty tricks” campaign.
This duel raged on for years and years giving Branson millions of pounds worth of column inches in the press. This was classic David versus Goliath stuff and Branson went to town on it, feasting on the status of British Airways and fusing it into the Virgin Atlantic brand all the way.
Everyone likes a trier. Branson personally became a brave knight and a hero to normal folk. A real man of the people.
I remember getting a client Will Davies, the CEO of Aspect Maintenance, the number 2 property maintenance firm in London after Pimlico Plumbers, up the media ladder.
I started a steady stream of lambasting critical stories about David Cameron in terms of what his government was then doing for entrepreneurs with Davies calling Cameron out for all sorts of alleged misdemeanours to small to medium-sized businesses.
The repetitive, unwavering stream of Will Davies stories consistently attacking the then Prime Minster through press releases after press release eventually worked with Will being the no-nonsense voice of reason for small to medium businesses and ending up on BBC News Channel discussing Zero hours contracts.
Round after round was fired off by Will, consistently taking pot shots at the Prime Minister.
The point being, the battle against the Prime Minister allowed Davies to share in the warm glow of the actual person running the actual country, without even having to receive an invitation to No. 10 Downing Street.
The F&*^ing bit is the other way to hotwire the limelight. This is a major trade for standard celebrities. In Los Angeles, agents take talent to meet-markets in bars where everyone works out who is dating who to provide rich content for the celebrity magazines. Its a real merry and money go round.
Elon Musk has certainly obtained a huge amount of rocket fuel from his rather colourful love life whether it’s the ‘did he or didn’t he’ provide the sperm for Johnny Depp’s ex wife, Amber Heard to have a baby. Musk’s roll call of conquests the bedroom have kept him in the news over the years as much as the deals he’s done in the boardroom.

Read more:
Becoming king of the media jungle means starting at the bottom and working your way up by winning title fight after title fight