By Keisha B. Ta-asan

INFLATION likely accelerated in July due to higher food prices and transport fares, but a cut in electricity rates and rollback in pump prices may have tempered the price pressures, according to analysts.

A BusinessWorld poll of 14 analysts yielded a median estimate of 6.2% for July inflation, well within the 5.6-6.4% forecast of the Bangko Sentral ng Pilipinas (BSP). 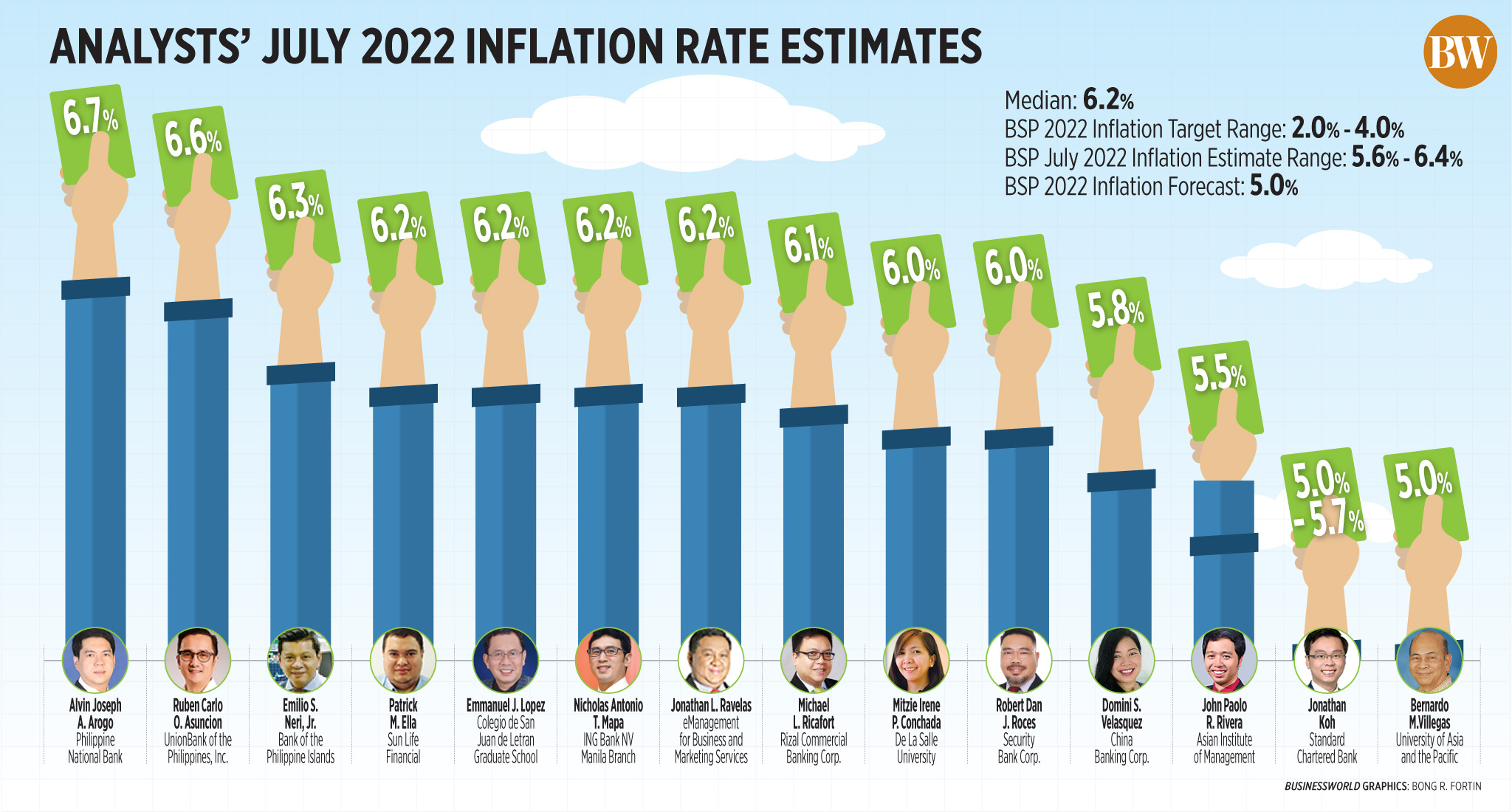 “Inflation for the month was driven by the continued increase in food prices, further transport fare hikes, and peso depreciation,” the BSP said in a press release on Friday evening.

Prices of food have gone up in recent weeks, reflecting the impact of higher oil prices and the weaker peso against the US dollar.

Customers of Manila Electric Co. (Meralco) saw lower electricity bills in July after the overall rate went down by P0.7067 to P9.7545 per kilowatt-hour (kWh).

“We estimated that inflation in July slowed down to 5.8% as the decline in the prices of oil, electricity in Meralco-serviced areas, and some food such as meat and fish,” Domini S. Velasquez, chief economist at China Banking Corp., said in an e-mail.

Fuel retailers cut pump prices in July as global oil prices have eased below $100 per barrel in recent weeks.

In July alone, oil companies cut pump prices for gasoline by P11.1 per liter, diesel by P12.95 per liter, and kerosene by P11.7 per liter.

“Transportation cost primarily is a concern for all production inputs which is a basic input to all production processes,” Colegio de San Juan de Letran Graduate School Associate Professor Emmanuel J. Lopez said in an e-mail.

Inflation is expected to remain elevated in the second semester, due to second-round effects from the hike in minimum daily wage.

“We expect high inflation to persist in the second half of 2022. Food and oil prices will likely remain elevated but will moderate moving forward,” Ms. Velasquez said.

“Moreover, we believe that the second-round effects will likely be more pronounced during the rest of the year due to the recent increase in the country’s minimum wage,” Mr. Arogo added.

BSP Governor Felipe M. Medalla told reporters on Friday evening that they are considering revisions to the inflation forecast for next year.

“In all likelihood, we will revise the inflation number down… For this year, we won’t change it too much. Exactly how much? We still don’t know,” he said.

In a bid to arrest soaring inflation, the BSP raised its benchmark rates by 75 basis points (bps) in an off-cycle move on July 14. The Monetary Board has raised policy rates by a total of 125 bps this year.

Mr. Medalla already signaled the BSP is likely to deliver another rate increase ranging between 25 bps and 50 bps on Aug. 18 depending on the inflation outturn for July as well as the gross domestic product (GDP) growth for the second quarter of the year.

The aggressive rate hikes helped stabilize the peso as the local unit closed at P55.13 per dollar on Friday, gaining 69 centavos from its P55.82 finish on Thursday, based on Bankers Association of the Philippines data.

“Looking ahead, the BSP will continue to monitor closely emerging price developments to enable timely intervention to arrest emergence of further second-round effects, consistent with BSP’s mandate of price and financial stability,” the central bank said on Friday.