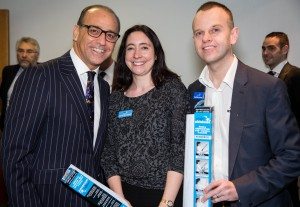 You might not be able to choose your family, but you can Pick n’ Mix the best media personalities to associate your image with – It’s who you hang out with that vitally defines who you are

As they say, ‘You are what you eat’, whether you devour caviar, lobster, kebabs, pies or cakes. Do you have large gargantuan meals or tiny portions on your plate? Are you all about rich or bland food? How about it being hot and spicy? All of this intake becomes you.

If it wasn’t who Theo follows on Twitter, who would Theo put on his invite list for the launch of his book, Enter The Dragon, by Theo Paphitis?

Brand Greta Thunberg has lots of interconnecting personalities that all intersect with it. These personalities are what her brand ultimately consumes. It’s like an interwoven busy Los Angeles Freeway with Greta as a traffic island at the very centre.

Proof of the pudding is in the eating, and these are the people that Greta has chosen to nibble on.

In terms of your persona, it’s very much made up, not in isolation, but who you associate with – both friends and enemies, what you read, the films you watch, the books you read, the walks and holidays you take, the clubs you join, the educational courses you complete.

In your image hill climb, you need to make conscious decisions about who you hang out with and what you spend your time immersed doing.

And to properly image climb you need to associate with, far less than the comfortable Z list in terms of influence. Instead, you need to go for the A list, which allows you to be dragged up.

As you go forward this builds and builds, ever-expanding, but always interconnected, with all joining lines leading back to you at the very epicentre.

With an atom, subatomic particles make each one up in the form of protons, neutrons and electrons. Critically there are a multitude of electrons, known as quarks.

This is where you get to have a smorgasbord of ‘friends on Facebook’ – or quarks – all forming an invisible hierarchy as they make up your atomic structure – or become part of your royal court.

Oliver Luckett and Michael Casey’s groundbreaking book, The Social Organism: A Radical Understanding of Social Media to Transform Your Business and Life, shows to an astonishing degree that social media influence mimics the rules and functions of biological life.  So embrace and work on your social DNA.

I argue its exactly the same DNA set-up with traditional media, you just can’t track it quite the same as on Facebook with notifications, likes and shares – instead only press cuttings.

Growth of your matrix of associations is much like Robin Hood collecting his band of Merry men on his travels. Little John, Friar Tuck, Will Scarlett, the Miller’s Son, Allan-a-Dale. Then of course there’s Maid Marion.

What ultimately made Robin, ‘Robin Hood’, was the inter-connected, expanding system of his band of Merry men and of course, Marion.

Make your proactive, conscious decisions on your associates wisely.

And be a good butcher constantly clearing the path so more positive associations can come through and connect with you at the very centre.

I remember coaching Duncan Bannatyne over a coffee outside at the Charlotte Street Hotel in 2006. It seemed trivial at the time, but it was a ‘Sliding Doors’ moment for Bannatyne at the time in terms of his growing influence on Prime Minister level.

Duncan announced to me over that coffee that he was going to publicly back then leader of the Opposition David Cameron.

I told him in no uncertain terms, “No you don’t support David Cameron, you’re supporting Gordon Brown, whose going to become the next Prime Minister”. Brown was still the Chancellor at the time before succeeding Tony Blair.

“Yes, that’s where you’re going to get the media traction – and credibility – because Brown’s on the rise”.

In 2008, Duncan Bannatyne defended embattled Prime Minister Gordon Brown and dismissed the MPs who have called for his removal as “treacherous”.

In 2010, Duncan Bannatyne helped Gordon Brown unveil his ‘seaside manifesto’ being named by Brown as his ‘Seaside Czar’.

Bannatyne’s New Statesman interview in April 2010 laid it all out. “Gordon Brown is the best person to run the country, and I hope he stays in power,” he said.

If you look at Sir Richard Branson, he works his associations at the very highest level. The King of Thailand, Queens, President Barack Obama. So, Branson chose his Democrat political affiliation carefully. But then his patchwork of associates is particularly eclectic. A visitor to his private Virgin Islands was Kate Winslett. So, its not just politicians and business celebrities, but Hollywood royalty as well.

I remember winging my way into the Sunday Times Business Christmas party with Duncan Bannatyne in 2006 at Claridges Hotel. Bannatyne was the only guest wearing a Hawaiian shirt and jeans with everyone else pretty much in suits.

I must have been the only PR in the room. This was a very exclusive business event. My former employer, Richard Desmond, then owner of the Daily Express, Daily Star and OK! Magazine, who I left for the world of PR in 2004, was there. He ducked and dived so he didn’t have to do small talk shielding me from coming over and chatting with Rupert and James Murdoch who he was there talking to. It was a wave from Desmond and then he turned away.

Days later I got an angry call out of the blue from him about his friend Sir Philip Green, who famously did all his own publicity, and I had been pitching to do his personal publicity referencing to my time working for Richard Desmond at Northern & Shell.

Green was keen to get someone who could place stories on him in the media so it wasn’t always him doing his own heavy lifting.

My wife had just recently cornered him at Swarovski Fashion Rocks in Monte Carlo in 2007 and explained I used to work for Desmond. The assumption was conveniently made that I was Desmond’s personal publicist as opposed to simply a ‘less relevant’ role.of being the Ad Controller for Regional and International.

So I got a dressing down on the phone.

When I bumped into Richard Desmond out for a walk in Hampstead one evening, I got the Sugar-style hairdryer treatment yet again. “Don’t f×£€ing use my name”!

I certainly made the most of my association with being a former employee of Northern & Shell and used not just Desmond’s name but also the galaxy of celebrities – business and otherwise – I interacted during my time there.

Like the time when David and Victoria Beckham wandered past my desk after hours, made some small talk, and slunk into Desmond’s office to sign a £1 million deal for the photo rights for an OK! Magazine exclusive.

At the Fashion Rocks event, my wife Lois reminded Victoria Beckham she’d met me, when introducing property magnate David Burke, who she was there at the event with and getting a group picture including Victoria Beckham. Victoria was very polite and obliging indeed.

Having worked at Northern & Shell was indeed currency in terms of making me hireable by all the Dragons and other business celebrities, it had real rub off.

The associations were worth their weight in gold.

The Dragons are a particular breed of business people who wanted access to celebrity culture not just the City of London – and the association with Desmond and my time at Northern & Shell was clearly a big part of it.

The hussle for associates can be the begging letter or the sheer implied association through the inclusion of various well-known names in all your press releases.

Drawing people to you is ultimately the best way around.

Growth is very much an even balance of both traditional and social media exposure working in parallel.

Remember, you can always fake it until you make it.

If you create the benchmark, then eventually people will indeed play catch up and rise to your occasion.

The best planning method is reverse engineering. Take a high profile personality you respect, and then work backwards in terms of everyone that’s following them.

With social media pinpointing and logging everything its much easier than you think to become inspired by the address book of someone you wish to emulate and ultimately overtake one day like a James Dyson or Tim Martin from Wetherspoons.

Read more:
Why picking the best media personalities to associate your image with defines you

Why Online Courses Are the Future of Business Education

New VAT system will be fairer but more complex