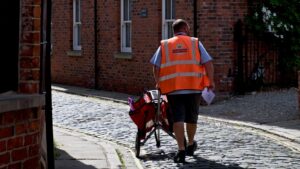 More than 115,000 UK postal workers have voted overwhelmingly for further industrial action over working conditions, ahead of four days of strikes already planned for later this month and early September.

The Communication Workers Union (CWU) said almost 99% of members voted in favour of taking further strike action on a 72% turnout.

“The ongoing attempts of Royal Mail Group to whittle away people’s hard-won working conditions will be met with fierce opposition,” said Terry Pullinger, the deputy general secretary (postal) of the CWU. “In these times, working people need more security on the job, not less, and we won’t be backing down until we secure an acceptable solution for our members.”

Postal workers are already due to strike in a separate dispute over pay on 26 and 31 August, and 8 and 9 September.

The latest ballot result means postal workers represented by the union will enter a “formal dispute” with Royal Mail, meaning the union is now legally mandated to declare further action.

Royal Mail has said it has offered a 5.5% pay rise for CWU workers, its biggest increase in years.

“Instead of engaging meaningfully on change that will secure future jobs, the CWU has decided to ballot against change,” said a spokesperson for Royal Mail.

“Royal Mail can have a bright future, but we can’t achieve that by living in the past. Customers want more parcels, bigger parcels, delivered the next day, including Sundays, and more environmentally friendly options. We wanted to meet this week but were disappointed the CWU couldn’t make it – we hope to meet next week.”

At the heart of the dispute is the loss-making UK postal business, which will continue to be called Royal Mail after a planned renaming of the overall holding company to International Distributions Services.

The company, which has become increasingly reliant on its profitable overseas operations, called GLS, is aiming to move towards a parcels-led business to cash in on the online shopping boom.

It says parcel deliveries represent 60% of Royal Mail’s business and that this transition, as letter deliveries decline, requires changes to ways of working.

The CWU has said Royal Mail’s purported 5.5% pay offer actually amounted to a 2% increase at a time of soaring inflation, which has hit a 40-year high of 10.1%.

“Postal workers in this country are being pushed to the edge, but there can be no doubt that they will fight the planned erosion of their workplace rights with determination,” said Dave Ward, the union’s general secretary.

Royal Mail, which last month said it was losing £1m a day and has threatened to break up the company if it could not achieve “significant operational change”, has said it hoped to break even in the current financial year. However, it has said that strike action will push it to a loss.