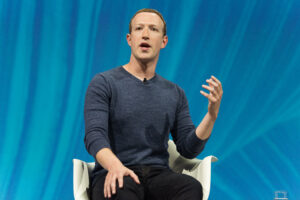 We’re now at the last stop in terms of preparing your media persona for take-off from the cliff edge, soaring into the sky on your hang glider.

You’ve identified your inherent facial archetype; conjured and curated all of your associates and carefully defined the hierarchy of your doing selves.

Now is the ‘Aha’ moment, where you become a beacon of recognisability in a crowded room.

Like Charlie venturing through the Chocolate factory, you’ve now entered the Costume department.

There’s no place here for shrinking violets. Its not the time and place to be shy about coming forward and to quote Enterprise UK, ‘Make Your Mark’.

Back on the 4th February, 2004, Mark Zuckerberg launched Facebook as a way to connect Harvard university students with one another.

The business was highly disruptive of everything we know, and it was communicated to the masses largely using the persona of its CEO, Mark Zuckerberg, who was very much playing the part of a disruptive teenager ready to throw the biggest party ever in his parents’ house while they’re away on holiday.

Zuckerberg and his friends wanted to follow the American dream in acquiring riches and glory – but they wanted it on their own terms – and they certainly weren’t going to wear any restrictive, stuffy, constraining corporate uniforms.

He famously took a meeting with top venture capital firm blue-chip Sequoia Capital in his pyjamas listing his pyjamas-wearing on a Powerpoint presentation as one of “The Top Ten Reasons You Should Not Invest” and let everyone know about it.

Magazines and newspapers poured over the Zuck-inspired blue bathrobe which he used to wear as he wandered about Harvard University campus. He wanted everyone to see his dress-down approach to everything. That’s what allowed him to so successfully promote Facebook.

He became a sort of anti-corporate rock star.

By 2011, Mark Zuckerberg, the founder of Facebook was finally confirmed by GQ Magazine as ‘The worst dressed man in Silicon Valley’.

Do, you think Zuckerberg was trying to win a style award? No, quite the opposite.

His business model and his dress sense were all about tipping the tables on their heads.

April 2018 was a landmark day, not because it was the first time Mark Zuckerberg was hauled in front of Congress over the data sharing scandal along with Jack Dorsey, then CEO of Twitter and Sundar Pichai, CEO of Google – but the first time anyone had ever seen Zuckerberg in a suit and tie.

Zuckerberg’s Laissez Faire attitude towards getting dressed for the office caught on like wildfire and then became almost a uniform for tech entrepreneurs.

Suddenly, if you weren’t in jeans and a T-shirt in the office, you weren’t a serious player.

Mark Zuckerberg, and his blue bathrobe, fuelled the tech revolution.

In terms of fashioning your unique identity, the simpler, and the more broad brush stroke, the better.

If you could be drawn as a line drawing or cartoon, all the better.

People should be able to recognise you across the world in one second, even in a darkened room, even from just a sketch.

When I represented the PR for former Dragons’ Den panelist and founder of Yo! Sushi, Simon Woodroffe, I went to a fancy dress party around the theme of ‘Famous Rock Couples’ on his Houseboat on the river Thames in Chelsea, which was Woodroffe tipping his hat to his idol Richard Branson, who also famously lived on a Houseboat on the Thames.

At Woodroffe’s party there was Bob Geldof, who I pitched do his PR, as my wife Lois knew him from old. Her and I had a narrow escape because we had originally intended to go as Michael Hutchence and Paula Yates. I don’t think that would have gone down very well. Manchester-based property developer Tom Bloxham MBE who famously wears his trilby hats was also there and Karan Bilimoria, founder of Cobra Beer.

I had dressed up as Pete Doherty with my wife Lois, as Kate Moss. I still had my beard-on but I was visibly recognisable as Pete Doherty purely because of wearing his iconic quintessential, like Tom Bloxham, Indie Trilby hat.

Doherty also made his look a series of skin-tight Hedi Slimane-Era suits, which I had to bypass for my roomier Hugo Boss suits.

Early on in my PR career, I adopted the R M Williams Australian outback hat. This was partly coming from a place of Last King of Scotland-Style appropriation of rather than Scottish iconography as adopted by the former Ugandan President Idi Amin, instead Australian Crocodile-Dundee-style iconography, a cheeky move for a New Zealander. But then it was also partly the fun and adventure aspect of Indiana Jones from Raiders of the Lost Ark.

This look certainly suited my profession.

I remember being at the GQ Man of the Year Awards and was talking to Hollywood Actress Alicia Silverstone and announced myself as a publicist. She flirtatiously grabbed hold of my hat and tipped it saying: ‘You don’t say’!

It was befitting for what I did to adopt this iconography.

I remember visiting former client Nick Wheeler, founder and Chairman of Charles Tyrwhitt Shirts, and I had forgotten to bring my hat. He was quite perturbed and spent the first 10 minutes or so of my visit asking why I didn’t have my hat with me. ‘Why haven’t you got your hat? You’ve got to wear it’.

I had a sort of face-off which Wilfred Emmanuel-Jones, known as The Black Farmer, when I worked with him two years ago to promote his campaign for Black History Month.

He was respectful, but perhaps a little uncomfortable with me sitting there in my tan-coloured Abubra hat while he was looking back wearing his black hat.

The 1990 book High Visibility: The Manufacturing and Marketing of Celebrities by Philip Kotler points out that whilst utilising indivividual ‘markers’ any media persona – whether business people, entertainers, lawyers, doctors or athletes, also need to follow ‘rules’ for each category.

If you want to be noticed as a film mogul, but you’re missing a chauffeur-driven limousine or multiple diamond rings on your fingers then you’re not ‘following the rules’.

Importantly, once you’ve nailed your look, you need to stick with it through thick and thin, never deviating.

Chef and Food entrepreneur Jamie Oliver since the early days as sous-chef at the River Café and then The Naked Chef, has dressed in lumberjack style shirts. He’s a big fan of plaid, wearing a lot of white and brown pocketed button-up shirts. Fans recognise Jamie Oliver because of this style of shirts. If he stopped wearing them now, then he would disconnect with his fan base. Its now engrained and a major part of his image,

When I organised for Heston Blumenthal to make a documentary for Channel 4 to turn around Little Chef with his fine dining menu, he contrasted sharply from Jamie Oliver by wearing his chef whites to turn around Britain’s most famous greasy spoon restaurants.

Harold Tilman, the former Chair of the British Fashion Council and head of Jaegar and Aquascutum made wearing bow ties his thing.

Haircuts are equally iconographic unique markers. Adam Neumann, formerly of WeWork, is now back with Flow, and instantly recognisable with his shoulder-length hair. It makes him visible as a swash-buckling entrepreneur.

Image isn’t just what you can see, it’s also the intonation of your voice as well. The late Stephen Hawking didn’t want to drop the tinny voice whatsoever even though technology would allow a totally natural sounding voice. It was part of the distinguishing kit set.

Think also about posture. Boris Johnson has lifted much of his image kitset from Winston Churchill, but swapping out the hair for his own iconic shaggy white mop.

Boris Johnson’s book The Churchill Factor, was basically an effort to link himself to the Churchill legacy and iconography.

Boris Johnson has this right down to mimicking the posture of the great war leader, adopting the same hunch and style of walking.

Think Sir David Attenborough for the whispy voice. Not many people hearing this voice would not be clear who it belonged to.

You can draw all of these iconographic markers together – utilising sight, sound, touch and smell – and make them unique to you.

Draw some from famous faces across history, which gives depth to your persona. Play with it.

And once it works for you, stick with it through thick and thin.

Read more:
The last stop before you’re ready for media take-off is the Costume Department