AFTER being on the receiving end of a payback loss at the hands of University of the Philippines (UP) to start the second round, National U (NU) is out to take its own revenge against Ateneo in the chase for UAAP Season 85 leadership at the Mall of Asia Arena.

The Bulldogs, who dealt the Fighting Maroons their lone loss in the first round, absorbed a 75-63 defeat in their second meeting and are hoping to use the defeat as added fuel to also get back at the Blue Eagles. 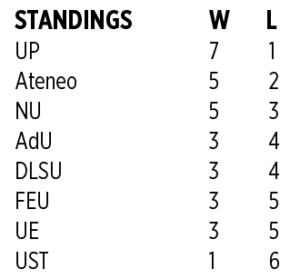 Streaking Far Eastern U (3-5) and skidding La Salle (3-4) then collide at 4:30 p.m. to complete the pivotal four-game bill as teams jockey for safe spots nearing the Final Four.

But the spotlight — and the challenge to prove itself anew — is on NU, which must play like a whole different squad if it is to exact revenge against Ateneo after a sound 77-60 beating in the first round.

“This is part of the adversity we have to brave in order to become successful, especially against Ateneo. Sabi ko sa team, iba na iyung hitsura niyo ngayon. Hindi na kayo iyung dating nauna nilang nakalaban (I told the team, you are showing a different look this time. You are no longer the team Ateneo met early in the season). Coming in this game is a different story,” NU coach Jeff Napa said.

“Pero paano magiging ibang story kung hindi nila titingnan kung sino man iyung nasa harapan nila. Kailangan, kahit sino man yan, kailangan nilang harapin as a group. (How can they write a different story if they don’t confront whoever is in front of them head-on). We’re 16 men strong, kailangan one page kami nang tatakbuhin (we have to all be on the same page),” he added.

Standing in the way of that bid of NU, once holder of the No. 1 spot early in the first round before a sudden skid, however is a well-rested Ateneo squad following the UAAP’s suspension of Saturday games due to typhoon Paeng.

The Blue Eagles haven’t played since Oct. 23 when they clipped the Red Warriors to stay on the coattails of rival and last season’s tormentor UP.