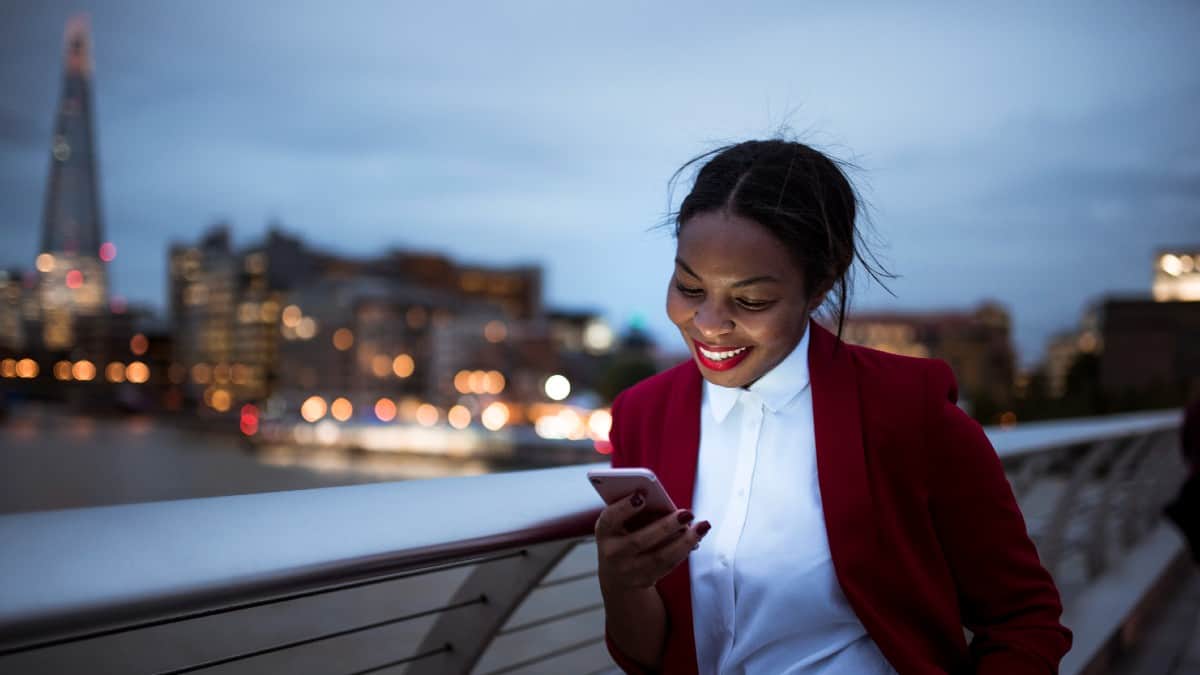 Every month, we ask our freelance writer investors to share their top ideas for growth stocks to buy with you — here’s what they said for November!

[Just beginning your investing journey? Check out our guide on how to start investing in the UK.]

What it does: Airtel Africa provides telecommunications and mobile money services in 14 African countries.

By Royston Wild. Airtel Africa’s (LSE: AAF) share price has slumped in recent weeks. I’d use this as an opportunity to buy a top growth stock at a discount.

Today the telecoms business trades on a forward price-to-earnings (P/E) ratio of 6.5 times. This is far below what, say, FTSE 100 rival Vodafone trades on (the earnings multiple here sits at 10.8 times).

City analysts think Airtel’s annual earnings will rise 12% in this financial year. They are tipped to increase 11% next year, too.

I’d buy the business to capitalise on soaring demand for telecoms and financial services products in Africa. It is the second-largest telecoms provider on the continent, and has been growing revenues and earnings by double-digit percentages for the past 17 quarters.

Product penetration across Airtel’s portfolio remains quite low. Meanwhile, personal wealth levels in its markets are increasing sharply. I think this perfect blend should deliver excellent long-term earnings growth at the company.

Royston Wild does not own shares in Airtel Africa.

What it does: Somero Enterprises designs and sells concrete levelling equipment used by construction companies worldwide.

By Zaven Boyrazian. Somero Enterprises (LSE:SOM) is a designer and manufacturer of laser-guided concrete-laying screed machines. It’s hardly the most exciting business out there, but it plays a pivotal role in the US construction industry.

With the American congress recently passing a $1trn infrastructure investment bill, management has had little trouble finding customers for its products. So, it’s hardly surprising that the group recently hit record revenues.

Despite this, Somero shares have tumbled more than 20% over the last 12 months. It seems investors are getting increasingly agitated about supply chain disruptions, which are having a significant impact on its non-US operations.

However, while frustrating, this is ultimately a short-term problem. And seeing a solid high-growth company trading at a P/E ratio of 7.3 looks too cheap in my eyes. That’s why I’m tempted to bolster my existing position by buying more at today’s stock price.

What it does: Chemring Group designs, develops, and manufactures advanced technologies for the defence industry.

By Charlie Carman. China’s rise and the Russo-Ukrainian war have boosted demand for products developed by Chemring Group (LSE: CHG). Defence budgets are expected to increase across its four home markets: the UK, the US, Norway, and Australia.

The group’s order book reached £678m in September, covering expected full-year 2022 revenues. New contracts with NATO members for the company’s countermeasures and energetics business indicate a robust manufacturing pipeline for 2023 and beyond.

Chemring’s other main arm focused on sensors and information also looks healthy. In H1 2022, this division generated 21% revenue growth and a 27% hike in operating profit.

Granted, net debt is currently £18.5m, which could limit future growth prospects. However, a 52% reduction in this figure since H1 2021 shows a positive trajectory.

In my view, significant barriers to entry in the sector contribute to the defence stock’s long-term potential, provided it remains at the forefront of developing state-of-the-art technologies.

Charlie Carman does not own shares in Chemring Group.

What it does: Darktrace is a cybersecurity company, and uses AI to develop autonomous detection of cyber threats.

By Alan Oscroft. A couple of brokers have price targets on Darktrace (LSE: DARK) of around twice the current share price. I’d never buy the stock based on that, but it’s inspired me to re-examine the company.

The shares got a little overheated last year, but then crashed after some negative reports. Over 12 months, Darktrace shares have now lost around 60% of their value.

Darktrace recently reported a 46% rise in full-year revenue, with a small net profit of $1.5m. It also confirmed 2023 guidance for a 31-34% increase in annual recurring revenue. Predicted adjusted EBITDA margin is in the 15-18% range.

The company has since reported a 29% year-on-year increase in net new customers in its first quarter, reiterating its full-year guidance.

We’re looking at a forecast P/E multiple of 130 as far out as 2024. So there’s definitely valuation risk there. But I think it could be the start of sustainable growth.

Alan Oscroft does not own Darktrace shares.

What it does: M&S is one of the UK’s biggest retailers. It specialises in selling clothing, beauty, home products, and food products.

By John Choong. Marks and Spencer (LSE: MKS) shares are currently trading at a P/E ratio of 7. Despite the grocery industry being known for its low margins, I think M&S could be an exception and be an excellent growth stock for the long term.

It’s no secret that Marks and Spencer’s products are priced on the higher side. Therefore, it may seem contradictive to buy its stock when consumers are ‘down trading’. However, I believe that the retailer’s target market (middle and upper class) isn’t necessarily trading down in groceries. Instead, they’re trading down in eating out, and choosing to seek value in purchasing M&S’ great-tasting packaged meals. After all, Tesco indicated this trend in consumer behaviour.

With the grocer’s latest cost-savings plan and exciting lines of clothing to be launched, I think the company’s top and bottom lines should benefit over the long term as it continues to fulfil its growth plans. As such, I think M&S shares have the potential to head higher from their current levels.

John Choong has positions in Marks and Spencer.

What it does: Safestore is a leading supplier of self-storage services in the UK and continental Europe

By Christopher Ruane. The Safestore (LSE: SAFE) share price over the past year might not suggest a compelling growth story. The shares are down 25% in 12 months.

But I think that offers an attractive buying opportunity for me to increase my stake and would consider doing so if I had spare money to invest.

In the most recent quarter, revenue grew 15% compared to the same period last year. That is part of a pattern of long-term growth I expect to continue. Self-storage continues to see growing demand in the UK. Safestore’s well-established brand can help it benefit from that. The company is developing a pipeline of new properties equivalent to around 14% of its current floor space.

A worsening economy could lead some tenants to try and cut their costs by reducing storage space. That might hurt profits. But I am upbeat about the company’s prospects and see strong growth opportunities ahead.

What it does: Rightmove is the UK’s most popular property portal, providing advertising services to new home developers and estate agents.

By Paul Summers: Shares in property site Rightmove (LSE: RMV) have tumbled nearly 40% in 2022 as investors have become increasingly skittish over the impact of higher interest rates on the UK housing market. I regard this as an opportunity.

At face value, a P/E ratio of 21 doesn’t seem like a bargain. However, it’s far less than the five-year average of 32. This presents as an even better deal when Rightmove’s massive market share, healthy financial position, and staggeringly high margins are taken into account.

A recovery won’t happen overnight and things could easily get worse for the stock depending on what the Bank of England decides to do about rates in early November. But it does feel like a lot of fear is already priced in.

And let’s not forget that Rightmove makes money even if the properties it lists fail to attract buyers or renters.

Paul Summers has no position in Rightmove.

What it does: Rightmove makes money by listing estate agents on its website and selling additional advertising products.

By Stephen Wright. My Best British growth stock to buy in November is Rightmove (LSE:RMV). I think that now could be a terrific time to add to my investment in this stock.

Right now, the UK property market is under pressure. Rising interest rates have been making mortgages more expensive and slowing down the demand for housing.

As a result, shares in Rightmove have fallen by around 37% since the start of the year. But I’m seeing this as an opportunity.

The company has a dominant position in an industry that typically has high margins and it generates significant amounts of cash. There might be some turbulence in the near future, but I think that the business will do well as the economy recovers.

Furthermore, the company has been buying back its own stock over the last few months. To me, this indicates that management also sees the stock as undervalued.

What it does: Diageo is a global leader in alcoholic beverages with products sold in more than 180 countries.

By Ben McPoland. Diageo (LSE: DGE) has been firing on all cylinders for many years. The British drinks giant has a portfolio of over 200 brands, including Guinness, Johnnie Walker and Baileys.

The share price is down this year, though, with the looming possibility of a global recession. Consumers, however, don’t tend to give up their favourite tipple, even during economic downturns. They are unlikely to switch from something like Johnnie Walker (the world’s most popular Scotch whisky) to a cheaper alternative. People basically put these drinks into the “affordable luxury” category.

This consumer loyalty to Diageo’s brands gives it a powerful competitive edge. And, due to its wide global presence, the company stands to benefit as disposable incomes rise in regions like Asia and Latin America.

The shares trade at a P/E ratio of 24, which isn’t particularly cheap. But I think the premium price is warranted for Diageo.

The Motley Fool UK has recommended Airtel Africa Plc, Diageo, Rightmove, Safestore Holdings, Somero Enterprises, Inc., Tesco, and Vodafone. Views expressed on the companies mentioned in this article are those of the writer and therefore may differ from the official recommendations we make in our subscription services such as Share Advisor, Hidden Winners and Pro. Here at The Motley Fool we believe that considering a diverse range of insights makes us better investors.