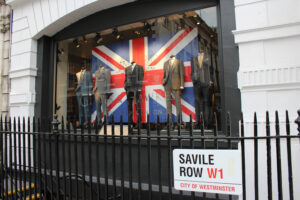 Michael Murray’s attempt to “elevate” the Frasers Group brand has stepped up a gear after the Sports Direct owner confirmed it had bought Gieves & Hawkes.

The Savile Row tailor, which has dressed royalty as well as Lord Nelson, Winston Churchill and Noël Coward, was put up for sale this year after its Chinese owner was placed into liquidation.

Frasers’ interest in the 250-year-old tailor emerged in September. Murray, who has taken over day-to-day running of the retail group from Mike Ashley, his father-in-law, aims to reposition Frasers as a more upmarket business.

Murray, 33, said: “This acquisition adds to our portfolio of strategic investments in luxury and premium brands.” It is understood all five Gieves & Hawkes stores will be part of the deal, including its best-known location at No 1 Savile Row in central London. Its other stores are in Bath, Birmingham, Chester and Winchester.

Last November a winding-up petition was issued against Gieves & Hawkes and its sister brands Cerruti and Kent & Curwen in a court in Hong Kong after its owner Trinity Limited defaulted on a loan.

Frasers has a record of buying distressed businesses. In June it bought Missguided’s brand out of administration for £20 million.

5 reasons to use VPN for gaming in Australia